Trinity The Tuck on Valentina’s elimination and Drag Race UK 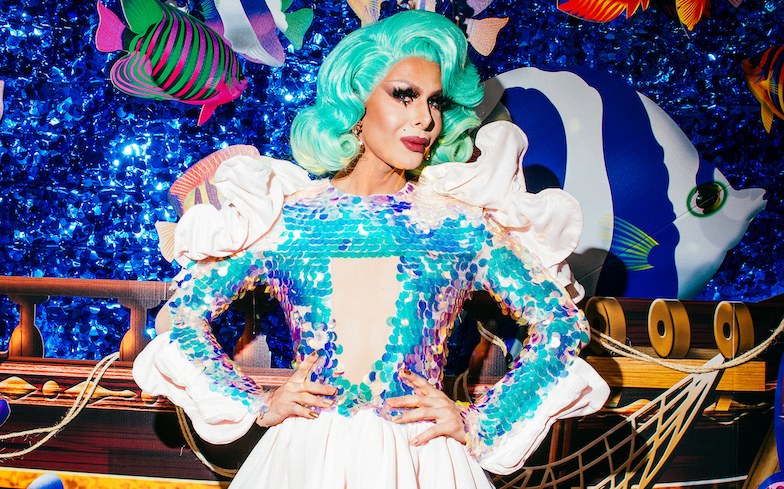 Orlando-based performer Trinity The Tuck made her Drag Race debut on the show’s iconic ninth season, and subsequently became one of the most legendary contestants in the show’s HERstory. During her stint, the performer won three solo challenges and showcased her growth and versatility more than any other queen that season. Sister Mary Kuntz, like, c’mon?!

She made her inevitable return to the franchise in the fourth instalment of All Stars, and honey, she has been slaying the competition left, right and mothertucking centre (literally). Again, Trinity has won three challenges, ten thousand doollahz, and is undeniably a frontrunner for the next laavley frame in the Drag Race Hall of Fame.

In celebration of her success, we caught up with the queen to discuss All Stars 4, her ah-mah-zeng new single The Face The Body, and the “bloodbath” that will be Drag Race UK…

So, we LOVE your new song. What made you want to release music?
Oh thank you! I wanted to release music because that’s a huge part of being a drag queen. Music helps you reach your audience. I wanted original content that I could be in more control of what I wanted the audience to feel. Plus making music and videos are super fun!

What was the inspiration behind the video?
I wanted to give something very high quality and visual. The metaphor is really about what it is to be a drag artist. The beginning starts with the higher being – the person behind the drag persona – then the being births their creation, and then we take over the world!

Can we expect more songs, possibly an album from you?
Oh yes! I’m a very ambitious person and if I’m going to do something I go full force. We have a full album and I have at least two more music videos planned, with special features and cameos left and right.

And you’re currently competing on All Stars 4 – what made you want to return?
It’s simple. I had unfinished business to take care of. I am not a quitter! I always finish what I start and I really want to be America’s Next Drag Super All Star!

You and Valentina became closer than ever this season. Was it hard to see her sashay away?
It absolutely was. People don’t realise how hard it truly is to be in that position to eliminate your friends and people you have built a relationship with. You’re crushing their dreams while you continue on. I love Valentina, but Valentina is resilient and a class act. Her talents will push her forward into huge things. Like Rent! She’s amazing!

You’re very outspoken on Twitter about how the fans can take the show too seriously. Why do you feel the need to speak up?
I think people forget that we are human, well most of me anyway [laughs]. And I’ve never claimed to be a role model or a politician. I am going to give my opinion just like everyone feels the need to do. I keep it real like it or not. I post positivity and when need be I call out bullshit!

Surely the community needs to come together, rather than tearing each other down, especially considering Trump’s transgender ban has been approved by the Supreme Court?
You’re absolutely right! We are all human and can all do better. We should have nothing but support as a community for our trans brothers and sisters.

Are you rooting for anyone in particular on season 11?
Oh my gosh there are several! I can say this is a season full of pageant girls and every single one is different. I hope the stigmatism – insert laugh – continues to be broken and this idea that any type of drag has to be in that designed box.

We’re also about to see Drag Race come to the UK this year. Are there any British queens you think would slay?
Hashtag Justice for Charlie! I think Charlie coming to the UK Drag Race would be amazing. I felt she had so much more to show. I’d love to see so many UK queens. You all have such creative and innovative queens. It’s going to be a bloodbath and I can’t wait to watch…

What advice would you give to someone who wants to audition for Drag Race?
Just be yourself! Give personality and show that passion they are looking for!

What does the future hold for Trinity The Tuck?
I hope it holds an All Star crown! But no matter what I feel like the future is bright. I want to break into TV and film and I have so many up coming projects in the works so stay tuned!

The next episode of Drag Race All Stars 4 premieres this Friday on VH1. Watch the trailer below.