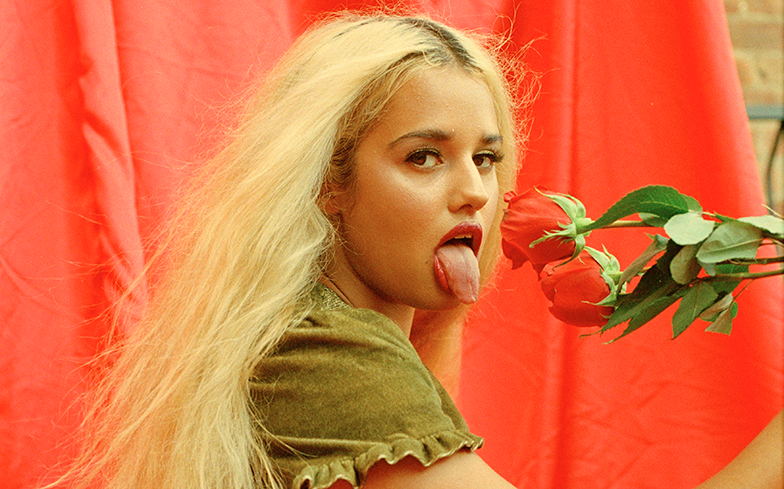 “I have a hard time talking about myself to be honest, because I know what your preconceived notions of me are going to be,” Tommy Genesis tells us as she preps for her photoshoot.

“I’m not trying to have a poster of me up in a church. I’m definitely proud of who I am, and I’m proud of how I identify.”

The self-described “fetish rapper” – who earned acclaim with her mixtape, World Vision – is gearing up to release her self-titled debut album in November, which will include rap-bops such as 100 Bad, Daddy and sex jam Play Wit It.

Unlike other artists in their debut era (or at all), Tommy is incredibly self-aware. She’s owning her sexuality and rapping about whatever the fuck she wants to rap about, because it’s her art and no one else’s.

We sat down with the Canadian artist and discussed homophobia in hip-hop, being in control of her artistry, and how she doesn’t conform to gender norms.

You describe your music as “fetish rap”. How did that come about?
A lot of people were making up their own words for me, and I coined it. I make fetish rap! I’m not making music to fit in, I’m just making music I like and music that reflects who I am. It will never be about changing my identity for anyone, and that goes down to everything I do. The reason I direct and edit my videos, come up with the concepts for my album art, my single art, and I’m really involved in the production, is because as a woman, if you don’t take a stand for who you are, someone else decides who you are. And it’s really easy to get put in their box of who you are, and I think it’s important to do it for every woman, and boys who are working through their own identity and sexuality, to show that you can do it your own way, and you don’t have to conform. You’ve got a lot of control with your artistry. Is this something you’ve had to fight for?
Yeah. Not so much with the songs, I have freedom with that, but definitely with making my videos. The 100 Bad video I already shot once, and I had to reshoot it because it’s so important that it comes across from my perspective. I’m hyper aware of these things, because I have to deal with it every day. When you pull up to a shoot, and people think you’re just another pretty face and they can tell you what to do, you have to set a precedent to be like, ‘I’m not going to be who you want me to be, I’m gonna be who I am’. At the bottom of everything, in your heart and mind, you actually do know who you are. You can be happy for someone else, but what actually makes you happy when you’re alone and no one’s telling you to watch that movie, no one’s telling you to listen to that song, you know what I mean? What are those things that actually make you happy? For me, it’s hard to even do interviews because people ask me, “What music do you like? What inspires you?” For me, it’s just more about trying to be the most genuine, raw version of myself in hopes that it’ll help anyone who can relate to me to be that way too.

You completely own your sexuality and womanhood in your videos. Often, women in the media are slut-shamed for this. Have you experienced this yet?
Yeah, they hate you until they love you. You can only do wrong until you do good. I don’t really take any of that personally, because I know once you go out naked in a bathtub, you’re gonna get people saying, ‘Oh she’s just pretty’ or ‘She’s using sexuality as a gimmick in her music’. I’m a very sexual person and I always have been. I come from a background of punk music and I might shock you just because of where I come from. It’s not because I’m sitting down being like, ‘What’s the most shocking thing I can do? Let me shock you’. The fact that I made you uncomfortable is a compliment. It’s funny that the minute you do something like that, people think you’re a slut which implies that you have sex with a lot of people, which is hilarious for me and anyone who actually knows me. I am the most monogamous person. D’Angelo’s music video for Untitled [How Does It Feel] is often regarded as one of the greatest videos of all time. Yet, if a woman did that…
Right? I think that it’s important – especially for young girls – for the concept of sexuality to not be taboo. It’s important for them to know that it’s a natural and beautiful thing. For me, I grew up in a really sheltered situation, so of course that’s gonna create the most rebellious kid. I just wish I knew then it isn’t taboo, it’s beautiful, and there’s so many cultures that embrace it. Our media and our society uses it as a tool to condition us and keep us in certain ideas of what it should be, and it’s really hard on young women and men growing up. The moment you stop caring what other people think, you can actually harness it. That goes with anything. You should always try and be a good person, obviously. I believe in choosing love over hate.

Rap and hip-hop as a whole doesn’t really embrace the LGBTQ community. Why do you think this is?
There’s a stigma, and the minute you say you’re LGBTQ, they’ll put you in a box. I just think that the way media has perceived our community, outside of our community, is just very stereotypical. It happens everywhere. It happens in TV shows. It happens in movies. They’re so ready to put us in this one specific stereotype, and the reality is, is that we’re diverse and we’re different types of people. You can’t just put us in this one personality, know what I mean? This one idea of who you think we are. Rap and hip-hop, I think it’s opening up, but I think that’s why. They have a pre-conceived notion of who we are and how we are, and that just doesn’t fit into what should be a rapper.

As a bisexual woman of colour, have you faced a lot of discrimination in your life?
It’s one of those things where it’s how people are introduced to me. I don’t walk around stating that I’m bisexual, so if someone’s read an article or listened to a song, or meets me on the street, I’m just me. You shouldn’t have to know what I believe in. If you meet me and we have a conversation, I’m not gonna tell you all these things I believe in, or my sexual orientation, so if you know who I am, it’s because you’ve read it or listened to my music. I understand my music isn’t for everyone, and I understand the way I’m portrayed to everyone. I’m not trying to have a poster of me up in a church. I’m not going into those places to wreak havoc. I’m definitely proud of who I am, and I’m proud of how I identify, but it shouldn’t matter, and everyone should be treated with the same amount of respect.

You mentioned about how you’re portrayed. What would you like people to actually know about you?
I have a hard time talking about myself to be honest. Just because I know what your preconceived notions of me are going to be. Of course, I’m always surprised by really special people who aren’t judgemental or whatever. I think people just assume I’m an Instagram model. Or, people know I’m a freak and they’re just like, ‘She’s that freak! She’s that crazy freak! Did you see her video?’ It’s really funny for me. I also have this really masculine and feminine energy and I don’t just identify with one. There’s two parts of me. I’ll dress up really girly, but I also won’t. Even when I was really little, I cut all my hair off and people thought I was a boy. Everyone would ask my sister, “Who’s your brother?” And I went through really girly phases, where all I would wear were skirts. For me, it’s like role play. Dress up. It’s part of who I am. If I’m sad, I’ll put on a wig and do my make up, and get dressed for no one but me. It’s something I love to do when I’m alone. I think it translates into me as an artist too, because I definitely have these two sides, and it’s really hard for people to understand. They’re like, ‘You don’t know who you are because you’re one way, then you’re another’. It’s like, ‘No, they’re both me, and I do know who I am’.

Now more than ever it feels like the gender binary is being challenged…
Yeah, exactly. Gender for the media is very black and white. You’re either masculine or feminine, you’re either happy or you’re a cunt. You either care or you don’t. No, actually, how I identify is masculine and feminine. I’m not confused about my gender and I’m not confused about my identity. People can’t understand that.