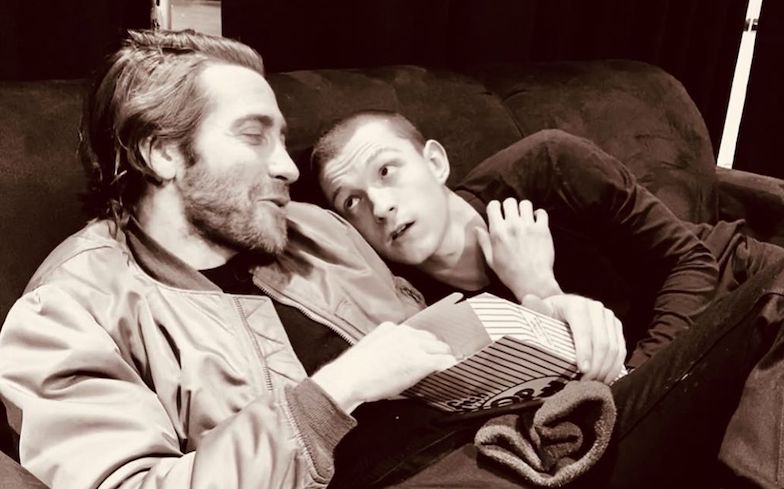 Remember last year when Jake Gyllenhaal announced his ‘engagement’ to his Spider-Man: Far From Home co-star Tom Holland and as a result, sent the internet and entire gay community into meltdown mode?

Well, fans (and us) have taken the bait once again with Tom’s new Instagram post, which shows an old video of him, Jake and his younger brother Harry catapulting water bottles into cup holders on their private plane. Yes, riveting stuff.

Tom captioned the post as, “Missing my husband,” which begs the obvious question: when in hell did they get married?

And why do we enjoy this (b)romance so much?

Jake replied to Tom’s post with wedding ring emojis and later called him his “best man”. Be still our beating hearts. It’s probably, most definitely, absolutely a joke, but we can still hope for a same-sex Marvel power couple, right?

It has also been reported that the Captain Marvel sequel will introduce a fan-favourite gay character. According to We Got This Covered, Hulkling – a Kree/Skrull hybrid who possesses shapeshifting abilities and super strength – will make his debut.

In the comics, Hulkling is part of, what is often referred to as “Marvel’s most prominent gay couple” with Wiccan, who has the ability to warp reality, as well as teleportation, astral projection and telekinesis. The representation doesn’t stop there.

Marvel’s upcoming solo Disney+ series for Loki will reportedly introduce the franchise’s first ever transgender superhero, Sera, who will be a major supporting character and could potentially cross over into the MCU film series.

It’s part of a new initiative by Marvel to become more diverse, especially after the critical acclaim and box office success of films such as Black Panther and Captain Marvel, both of which grossed over one billion dollars.

The first film in Marvel’s upcoming ‘Phase 4’ will be Black Widow, which will see Scarlett Johansson reprise her role for a prequel, set in-between the events of Captain America: Civil War and Avengers: Infinity War.

Due to the global coronavirus pandemic, the film has moved from its original release date of 1 May to 6 November.