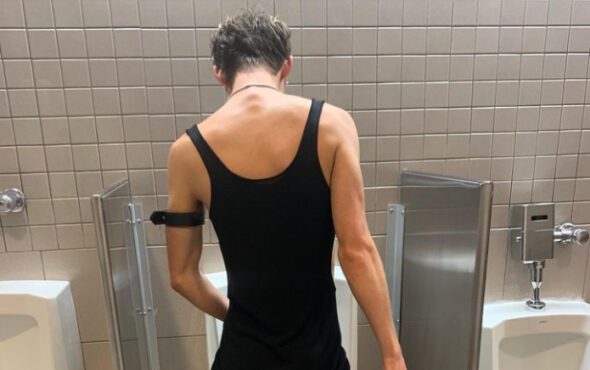 Troye Sivan has revealed that an already infamous picture from the 2021 Met Gala was taken by two of the world’s biggest stars.

The Angel Baby singer shared a picture of him standing at a urinal holding up his Cartier dress to urinate.

Just 21 hours after being uploaded on Instagram, it had already been liked over 973,000 times – partly because of what Troye revealed in the caption.

“@badgalriri told @tomdaley to take this pic of me weeing,” he wrote.

“True story,” Tom commented, confirming that Rihanna was the mastermind behind the iconic image.

This year’s Met Gala took place in New York on 13 September and queer stars dominated the event from start to finish.

The theme of the night was “In America: A Lexicon of Fashion” with looks inspired by everything from movies to architecture.

Funds from the night will go to the Metropolitan Museum of Art’s Costume Institute and it took place with COVID-19 protocols in place.

Guests had to show proof of vaccination to attend and wear masks indoors unless eating or drinking, with last year’s event being cancelled due to the pandemic.

Queer celebrities such as Dan Levy and Kim Petras made their Met Gala debut, leaving viewers gagged with their jaw-dropping looks.

One of the most show-stopping looks of the night came from Lil Nas X, who wore a Versace suit of gold armour alongside two other outfits.

Also present was Elliot Page, making his first appearance at the event in a dark suit with a nice pop of colour from a green rose on his lapel.