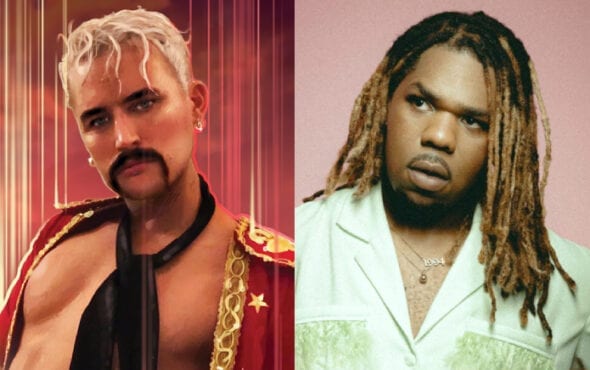 Traces, originally included on his widely-acclaimed debut album Black Country Disco, has been transformed from a mid-tempo disco anthem into a significantly more up-tempo, 80s and 90s-inspired club banger.

While the melody and overall vibe of the track has been completely revamped, the new version still retains that triumphant sensation of getting over a former lover.

Speaking with GAY TIMES, Tom says MNEK – who produced his first ever single Indiana – was the perfect artist to hop on the remix because he’s “at the zenith of it all, he’s the gold standard at the minute, blazing a trail for all of us.”

Remembering the moment the Head & Heart chart-topper sent him the final version, Tom said: “I didn’t have any notes!

“I just loved it. I was never worried – our early friendship was mostly built upon a shared love of obscure pop music from the 80s, 90s and 00s, so I know his taste level and unique production style is heavily indebted to a lot of that stuff.”

Although Tom has already released two tracks from his upcoming remix album Black Country Discothèque, the 80-inspired The Program and a Funk LeBlanc-assisted remix of Traces, he calls the MNEK version the official lead single.

It also includes covers of Robin Thicke’s 2005 single Wanna Love You Girl, as well as Prime Time, a track taken from The Tubes’ 1979 album Remote Control.

Tom said it was important for him to collaborate with and highlight “the wealth of queer talent out there” on Black Country Discothèque. He was inspired by Bright Light Bright Light’s album Fun City, which boasted all-queer duets.

Black Country Discothèque will be released this Friday (16 April).

Traces (MNEK Remix) is now available on iTunes and streaming services – listen here on Apple Music or below.