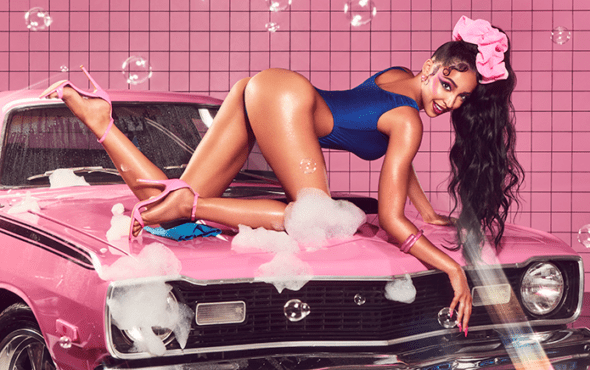 All Hands on Deck, because Tinashe is GAY TIMES Magazine’s new cover star.

The American singer-songwriter, dancer and actress has received widespread critical acclaim over the past year for her fourth studio album, Songs For You – her first project since her departure from RCA Records in February 2019.

And this summer, Tinashe has received further praise for her “bad bitch” R&B anthem Rascal (Superstar), as well as her infectious feature on Iggy Azalea’s new single, Dance Like Nobody’s Watching.

In our latest issue, the 27-year-old discusses her “positive split” from her record label, striking out on her own and feeling comfortable enough with calling herself bisexual.

“It’s not that I don’t like putting a label on it,” she tells GAY TIMES.

“But when you say you’re bisexual, a lot of people think… they just have a lack of understanding about what it is. And I tend to shy away from terms – I guess this is the theme of my life! – that make people want to categorise me or put me in a box.

“I don’t like that shit. But – but – I can still give you a general sense of yeah, I’m bisexual. I’m somewhere on the spectrum. You know?”

Tinashe also discusses the misconceptions and stereotypes around bisexuality and how there’s “such a variety of flavours and colours”.

She continues: “I never wanted people to think that I used it for attention. There are so many fucking stereotypes about being bisexual that made me want to shy away from talking about it. I’m much more open to having those discussions now.”

You can read the full cover story in the Autumn 2020 issue of GAY TIMES, which is out now and has been completely reimagined and redesigned as a quarterly title.

You can buy your copy of the issue here, and GAYTIMES+ members get the magazine first. You can find out more about how to sign-up here.