Tilda Swinton Answers An Ad On Craigslist is gripping, visceral and hysterical – review 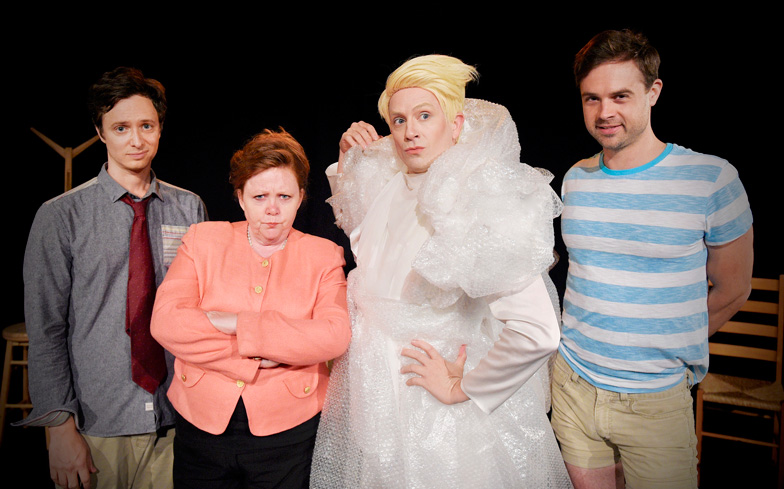 Walt’s life is not going brilliantly. His boyfriend – who was always catching STI’s ‘from the gym equipment’ – has moved out, his overbearing mother constantly seeks to control him, and his career as an accountant is bringing him little joy. Things may well be about to change as international movie-star and consummate chameleon Tilda Swinton answers an ad on Craigslist and moves into his apartment.

Tom Lenk, perhaps best known for his portrayal as Andrew Wells in Buffy The Vampire Slayer, stars here as the titular diva. The show revolves around Lenk’s stunning performance as Tilda Swinton – this is drag, but not as we know it. From the moment he enters, resplendent in bubble-wrap couture, Lenk totally commands the stage with an arch interpretation of Swinton that’s dripping in camp irony and cutting wit, and so deliciously off-kilter that it feels like something brand new. Asides to ‘camera’ and comically absurd prop business are parcelled into an iconic and triumphant characterisation that is destined to go down in queer theatre history.

The script, bursting with hysterical one-liners, is the work of Byron Lane who also takes to the stage in the part of Walt. Lane gives us an ‘everyman’ who’s easy to love, despite his apparent flaws; an adorable performance. The meat of the piece is Tilda ostensibly using Walt as a character study for an upcoming movie, managing to explore some fairly deep and dark themes while never losing its comic edge. A quite remarkable feat of theatrical engineering. A ridiculous central premise that absolutely delivers; gripping, visceral, and hysterical.

While happily taking playful swipes at all manner of pop culture and celebrities – Lenk’s impression of Eddie Redmayne is a particular joy to be savoured – this is a production that’s ultimately full of heart. Forget the big-budget Hollywood sequel,  this is the queer Mary Poppins that LGBTQ people deserve. A modern masterpiece.