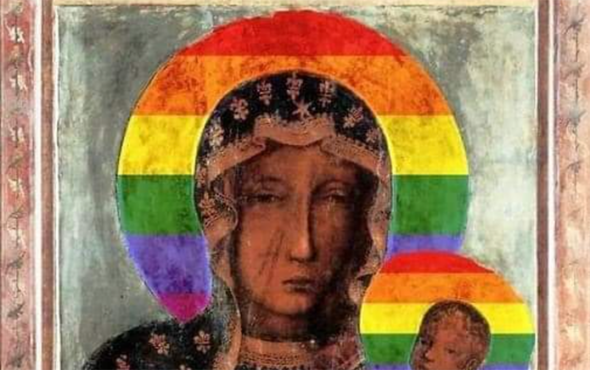 “The goal of the activists…was to show support to LGBT individuals, to fight for their equal rights.”

Three Polish LGBTQ+ activists have been acquitted of all charges after being accused of offending the Catholic religion.

Back in April 2019 Elżbieta Podleśna, Anna Prus, and Joanna Gzyra-Iskandar Podleśna were arrested for carrying posters that featured the Virgin Mary with a rainbow halo.

Judge Agnieszka Warchol, who presided over the case, states: “The goal of the activists…was to show support to LGBT individuals, to fight for their equal rights.”

Before being acquitted the three activists were looking at a sentence of two years in prison if they were found guilty.

During her trial, Elżbieta Podleśna explained to the BBC why the demonstration was important for the LGBTQ+ community.

“Nobody should be excluded from society,” she said. “Sexual orientation is not a sin or a crime and the Holy Mother would protect such people from the Church and from priests who think it is okay to condemn others.”

The judge also revealed that practising Catholics and clergy sent in letters informing the court that the rainbow halos did not mock or demean the Virgin Mary.

Love Does Not Exclude, an LGBTQ+ rights group, praised the ruling, stating: “This is a triumph for the LGBT+ resistance movement in the most homophobic country of the European Union.”

These arrests were just one of the many injustices LGBTQ+ people face in Poland.

In recent years, the Polish government have targeted the LGBTQ+ community and supported organisations that spread homophobia.

The country has face backlash from its residents, the European Union and President Joe Biden for its “LGBT-free” zones and homophobic behaviour.

These ‘LGBT-free’ zones came to fruition after the country’s ruling Law and Justice Party inspired several towns in Poland to be free from “LGBT ideology” – putting vulnerable LGBTQ+ citizens at risk of discrimination, prejudice and violence.

Fifty countries from around the world have signed an open letter calling for Poland to “protect all citizens from violence and discrimination and to ensure they enjoy equal opportunities.”