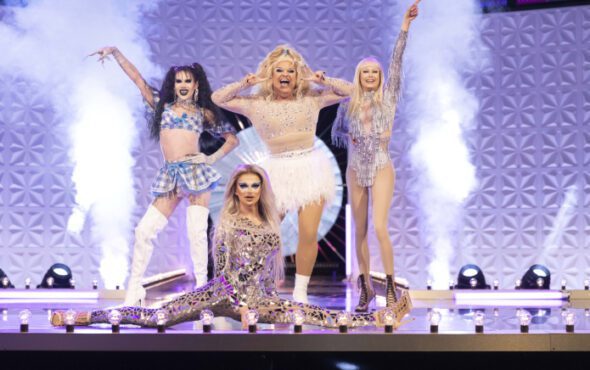 Whew lordt, now that was an episode of RuPaul’s Drag Race UK!

With the first two seasons boasting chart-topping (iTunes) anthems, Break Up Bye Bye and UK Hun?, expectations were high. Unlike past seasons, however, the groups performed the same track but in different tempos: a slow and intimate version and a high-energy pop version of BDE, which stands for Big Drag Energy. We’ll admit, it’s not as catchy, in our opinion, as the aforementioned critically-acclaimed bops but we will be purchasing, we will be streaming, we will be doing everything in our goddamn power to secure the girls a nice little peak on the UK Singles Chart.

The winner of last week’s challenge, Scarlett, and lip-sync winner Vanity both selected their teams – naming their respective girl bands as Slice Girls, which consisted of Charity, Kitty and Krystal, and Pick’n’Mix, with Choriza, Ella and River. After Scarlett strategically chose the uptempo version for her group (who wouldn’t?) and the ballad for Pick’n’Mix, the teams were mentored by Deeper Shade of Blue hit-makers, Steps. Sadly, Lisa Scott-Lee was unable to attend due to coronavirus restrictions in Dubai.

Claire Richards and Ian ‘H’ Watkins coached the queens with their powerhouse vocals while Faye Tozer and Lee Latchford-Evans helped them slay with fierce choreography. After lighting up the stage with their Big Drag Energy (out now on iTunes!) the queens sashayed and shantayed down the runway in gorgeous ensembles inspired by the Spice Girls – in front of Baby Spice herself, Emma Bunton. RuPaul declared Pick’n’Mix as the winners, with each contestant receiving a “highly coveted” RuPeter badge, while the Slice Girls were critiqued on the main stage. Krystal and Kitty were praised for their performances, although the former was criticised for not showcasing her personality, and Charity was read for her look in the challenge and Mel B-inspired leopard print runway.

“I thought your lyrics were fun. Perhaps a bit naughty in places that didn’t call for. You did stand out for some of the wrong reasons,” said Ru. Michelle added: “Tonight on the runway, this is pure art. This is beautiful, this is amazing. But being honest, I’m not getting Spice Girls.”

After forgetting her lyrics and steps in the performance, Scarlett received the harshest critiques from the judges. “You rolled your eyes on stage,” said Alan Carr. “I saw you say ‘Oh no, I’ve messed up!’ and I was like, ‘Oh no, don’t do this to yourself!’ And when you came onto the runway, I thought you brought it with you.” Emma agreed, saying: “I can’t tell you the amount of times I have fallen over on stage. It’s embarrassing but you just have to get yourself back up.”

Charity and Scarlett faced each other in the lip-sync smackdown to Spice Girls’ classic number one anthem for Comic Relief, What Do You Think You Are. For the first time in Drag Race UK herstory, RuPaul saved both queens from elimination.

Here’s how fans reacted to the episode:

Hell will freeze over before they ever declare a solo winner from a Drag Race UK girls group challenge.#dragraceuk #DragRace #DragRaceUK3

honestly i liked the slower one, it was no uk hun or break up bye bye but it was better than some other songs from drag race

Will any song on Drag Race ever top UK Hun? That’s the question #DragRaceUK pic.twitter.com/ZZdZzezvDk

I woulda come out in a fucking black winter coat, frozen turkey and a TESCO TROLLEY for my Spice Girls look #DragRaceUK

Charity Kase literally turns it out in looks each week, and gets sidelined for queens who wear the most basic looks that could be bought online#DragRaceUK3 #DragRace #dragraceuk

Bless that double save 😭 I’m not ready for Scarlett or Charity to go #DragRaceUK pic.twitter.com/6zfiPkCFTu

omg drag race uk was so good this week

On next week’s episode, the queens will “promote and personalise the Draglexa” with special guest star Leigh-Anne Pinnock from Little Mix. The first four episodes of Drag Race UK season three are available to stream now on BBC iPlayer.