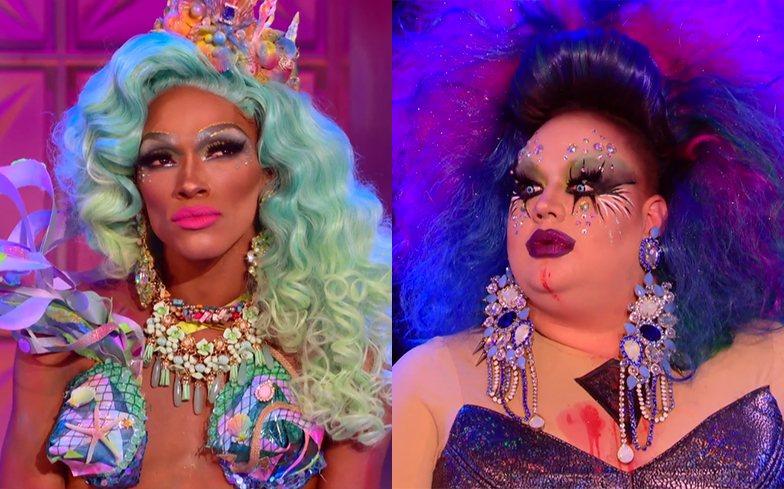 The drama between Eureka O’Hara and The Vixen came to a head.

Ooh honey, this week’s episode of RuPaul’s Drag Race has left us cooped and gooped on so many levels.

We saw the return of the fan-favourite challenge, Snatch Game, contestants delivered some season two-esque Tatianna vs Tyra drama on the main stage, and we were blessed with a Carly Rae Jepsen lip-sync! What more could you fucking want?

After the queens sashayed (in a wheelchair) down the main stage in their finest mermaid eleganza, the judges declared Aquaria the winner of the challenge for her genius turn as The First Lady.

Monet and Eureka were praised for their performances, while Asia, The Vixen and Monique were heavily criticised.

After receiving their critiques, RuPaul asked the queens the dreaded question: “Who deserves to go home tonight?”

The Vixen used the opportunity to slam Eureka, who she’s previously had conflict with in the competition.

She told the judges: “I have never seen such a level of unprofessionalism as I have watching Eureka and it baffles me that you guys enjoy her so much. It really has been very difficult working in an environment with her because she takes all the air out of the room.”

In response, Eureka said: “In my defence,  I tell everyone all the time ‘I’m sorry I’m so loud’ and ‘I’m sorry I’m too much'” to which The Vixen interjected, “But you don’t stop trying to be loud or try to stop being too much.”

After their dramatic back-and-forth, Asia, Monet, Monique and Aquaria said they’d like The Vixen to go home.

Monique and The Vixen then lip-synced to Carly Rae Jepsen’s underrated pop banger, Cut to the Feeling, and the former was told to sashay away after not knowing the words.

It was one of the most surprising and drama-filled episodes in Drag Race HERstory, so obviously, fans have a lot to say…

Check out the best reactions below:

the vixen doesn't want to change her personality for anybody but is insistent on eureka changing hers. hmmm. bye. #dragrace

SEND THEM BOTH HOME AND BRING BACK VANJIE #DragRace

NEVER TAKE OFF YOUR WIG WHEN DOING A LIP SYNC WE ALL KNOW THIS #DragRace pic.twitter.com/X890cIrO84

The library, snatch game AND @TheBiancaDelRio in one episode?? My heart is about to explode – and it has nothing to do with my cholesterol this time! #DragRace

The song we all wanted as a lip-sync, but not like this! #DragRace Love you so much @IAmMoniqueHeart!! 💕 #OohAhAhSensation pic.twitter.com/0GjDthEQU2

That was, quite simply, one of the most painful lipsyncs in herstory… And, sorry gal, but the gag is, if you'd known a single lyric, you'd likely have stayed, as the queen who beat you was primed for the chop. You fucked yourself. #DragRace pic.twitter.com/Msac4r7mNG

The seventh episode of RuPaul’s Drag Race season 10 is now available to stream on UK Netflix.