This was RuPaul’s Best Friend Race: The Reunion 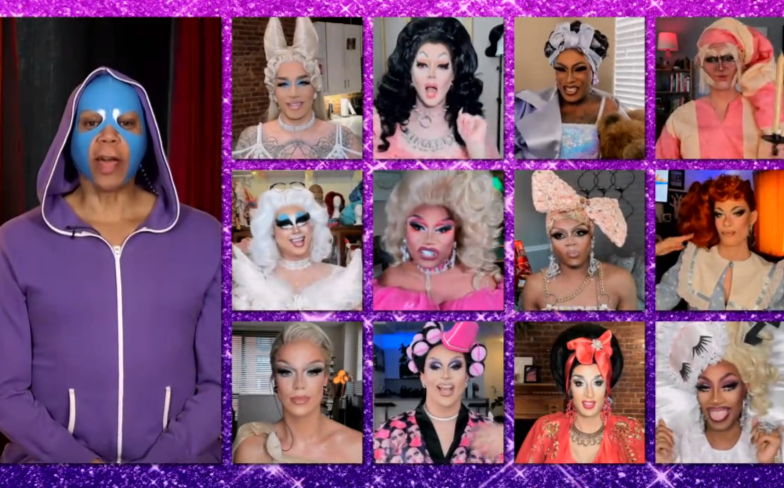 There was no drama compared to other reunions.

Previous Drag Race reunions have given us epic confrontations. Who could forget Tatianna and Raven’s fight, the clash between Farrah Moan and Valentina, or when The Vixen stormed off halfway through? But this time around, like most of the season, this was RuPaul’s Best Friend Race.

One of the biggest pieces of drama throughout the season was Aiden Zhane vs. Brita, with the latter queen labelling her “lazy” after she memorably took a nap during the ball challenge, before clashing on numerous other occasions. Addressing this, Aiden said she could see that Brita was “pissed” and that the New York queen “came in with expectations of herself and when she didn’t feel she was living up to that, it was normal for her to look at somebody who she felt was a weaker competitor and be like ‘Why are they succeeding and I’m not?'”

And to that, Brita immediately agreed, and said she was “feeling the pressure” from people who assumed that she would come into the season and smash it. Aiden then said that Brita hadn’t been bullying her, with Jan and Jackie Cox wishing people could see the Brita that had supported them throughout their careers.

Elsewhere in the ‘maybe slightly drama, but not quite’ department, Nicky Doll addressed her early exit, and said she was “stupid” for nominating herself to be eliminated, adding that rewatching the episode she found her character funny and should’ve defended it. We nearly got to drama when Crystal said she nominated Nicky as Heidi was her scene partner, and felt she couldn’t, to which Nicky asked why she didn’t then nominate Brita, but nothing ultimately came of it.

The reunion did attempt to create some drama with Rock M. Sakura jokingly confronting Jaida Essence Hall over why she couldn’t have the ‘Bad Apple’ role, but as the drama enveloped all the queens it was clear to see the fakery.

But with less drama, it did allow for more emotional and funny moments, with Rock explaining that her mother watching the show made her understand the hurt she’d caused to the San Francisco queen, and Brita joking that Jan was only sad about her elimination as she could no longer hit the ‘Shade’ button.

Meanwhile, fans, who totally weren’t Vanessa Vanjie Mateo and Brita, asked about the status of Jackie’s relationship and whether she and Vanjie would become an item – sorry Janjie fans, you have to wait a little bit longer – and whether Brita could describe herself without using the phrase ‘New York’. Crystal and Gigi also addressed rumours about their relationship following a kiss in Untucked, and although no definitive answers were given, Crystal teased there could be a “fact within the fiction.”

In the reading challenge, there were some great moments, with Brita telling Aiden she only treated her harshly to prepare her for Patricia Quinn’s reaction to her Snatch Game performance and Crystal asking Jan for a condom as she’s always safe.

And when the queens were asked to describe the season in one word, Widow Von’Du went with “star”, Jan went with “safe”, Rock went with “robbed” and Crystal went with “El DeBarge.”

The episode ended with Ru asking the eliminated queens who they were backing, with Aiden opting for Jaida, Jan backing Gigi and Widow supporting her homegirl Crystal. Ru also revealed that the queens would be facing each other in five lip-syncs in next week’s finale.

The finale of RuPaul’s Drag Race Season 12 will air on Friday (29 May) and be available on Netflix UK the following day.

Related: Here’s the gag-worthy list of guest judges for Drag Race All Stars 5