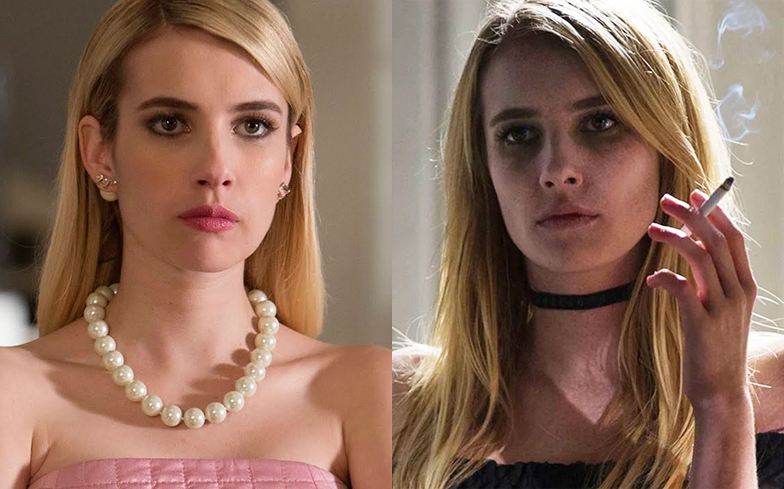 The horror-comedy TV series, which boasted sharp-tongued humour and a string of high-profile stars including Jamie Lee Curtis, Ariana Grande and Nick Jonas, was officially cancelled in 2017 after just two seasons (we were devastated).

Despite the early cancellation, series creator Ryan Murphy has teased a return on multiple occasions (most recently in November) and fans are passing the time by coming up with theories about the show’s future storylines.

One of the most interesting theories recently pointed out by ScreenRant is the potential for a crossover with Murphy’s most popular series, horror anthology American Horror Story.

The major link between the two shows of course is star Emma Roberts, who has played two very similar characters on each – witch Madison Montgomery in American Horror Story: Coven and popular girl Chanel Oberlin in Scream Queens.

Could we see a meeting of the two fan favourites in the future? Potentially.

One reason fans believe the shows exist in the same universe is because of a recurring surname; in Scream Queens there’s Muffy St. Pierre-Radwell and Tristan St. Pierre, and in American Horror Story: Apocalypse there’s Coco St. Pierre-Vanderbilt.

Both shows take place around the same time period, so it’s possible all those characters could be part of the same St. Pierre high society family.

Elsewhere, fans previously noticed that a patient in season two of Scream Queens had a scar on their head in the shape of a question mark, which is very similar to a promotional image that teased American Horror Story: Roanoke.

It’s also been pointed out that in Coven, Kyle is part of the fraternity Kappa Lambda Gamma, and in Scream Queens a character was spotted wearing a shirt that appeared to be identical to one Kyle wore, suggesting the fraternity exists in both universes.

Murphy once said each standalone season of American Horror Story would never cross over with each other, but that eventually happened in a big way in 2018’s season Apocalypse, where characters from Coven and Murder House came together to save the world.

Hardcore fans will remember that it was once rumoured that Chanel Oberlin would appear in American Horror Story: Apocalypse, after Emma Roberts was seen on set wearing a baby pink outfit that was more suited to Chanel than Madison.

That never happened, of course, but that doesn’t mean we won’t see it in a future season – and it would be a nice compromise if we can’t get another round of Scream Queens.

For what it’s worth, Murphy revealed last year that stars Emma Roberts, Lea Michele, Jamie Lee Curtis, Abigail Breslin and Billie Lourd are all ready to return for another season of Scream Queens, adding: “I think we’re waiting for [Fox] to call us.”

We’re keeping our fingers crossed for either a crossover or a full-blown comeback – as long as Chanel Oberlin is back on our TV screens, we’ll be happy.