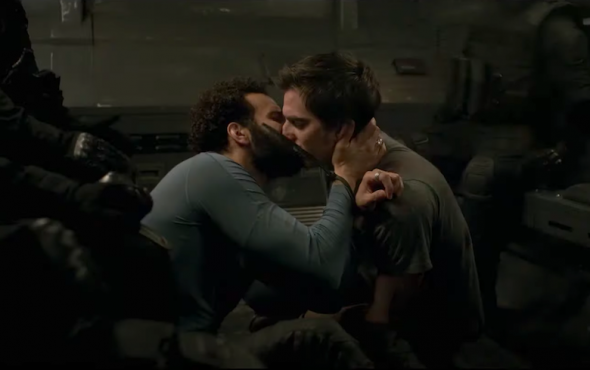 Netflix have released a passionate queer scene from their upcoming blockbuster, The Old Guard.

Based on the acclaimed comic book of the same name, the film focuses on a squad of centuries-old immortals and mercenaries – led by a hardened warrior called Andy (Charlize Theron) – who have the mysterious inability to die.

The team’s mission of protecting the mortal world is thrown off balance with the awakening of the first new immortal in centuries (Kiki Layne), and the emergence of a new threat seeking to replicate and monetize their power. Unlike other mainstream action blockbusters, The Old Guard features two leading LGBTQ+ characters – played by Kenzari and Marinelli – and as immortals, they have been in a relationship for – wait for it – centuries.

In the short clip, their characters Joe (Kenzari) and Nicky (Marinelli), can be seen handcuffed in the back of a van, surrounded by a team of SWAT soldiers. After Joe expresses concern over Nicky, one of the ‘macho’, heteronormative soldiers asks the tired question we’ve all heard from our homophobic high school bullies: “What, is he your boyfriend?”

Joe’s response? One of the most passionate queer movie moments of 2020. If you thought Netflix were going to follow in the footsteps of other studios and just hint at the sexuality of their LGBTQ+ characters, you were so very wrong.