This is what RuPaul thought of Call Me By Your Name 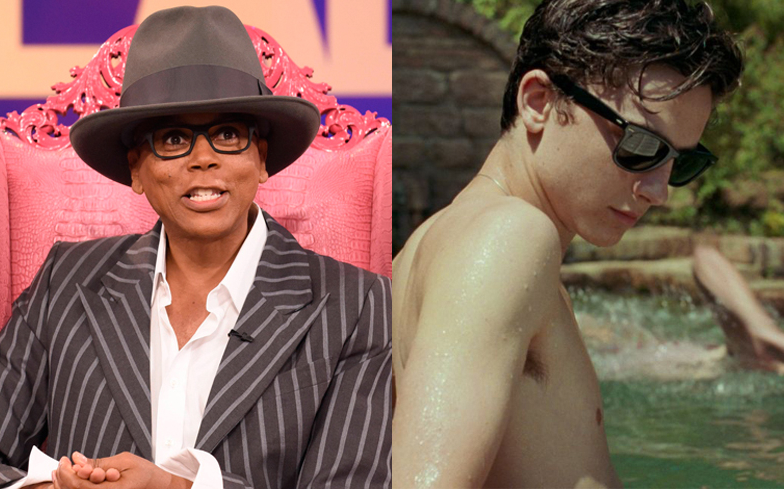 “It’s so beautiful. I loved it so much. That last scene in the movie, it just tears me apart.”

Mama Ru has shared her thoughts on this year’s Oscar nominees, including the critically-lauded gay romance/drama Call Me By Your Name.

The film – which follows the love story between Elio (Timothée Chalet) and Oliver (Armie Hammer) in Italy during the summer of 1988 – has been nominated for four Academy Awards, including Best Picture and Best Actor.

“It’s so beautiful. I loved it so much. That last scene in the movie, it just tears me apart,” the (two-time) Emmy winner told Indiewire.

On Timothée’s performance, Ru said: “I hope he gets the Oscar. I hope he does. Beautiful, beautifully done.”

Related: Call Me By Your Name sequel will touch upon the 1980s AIDS crisis.

He also expressed his disappointment for Michael Stuhlbarg’s Best Supporting Actor snub: “The movie is all about that scene with the father. I wish that he had gotten nominated for an Oscar.

“That Michael Stuhlbarg, since ‘A Simple Man’ he’s been in every single movie that’s ever been produced. He is amazing, and that scene with him at the end of the movie is perfection. That’s what it’s all about, that’s what the whole movie is all about. So gorgeous.”

The scene Ru is referring to is the beautiful moment shared between Elio and his father Mr Pearlman (Stuhlbarg), shortly after Oliver returns to America. Mr Pearlman confesses to a similar love affair with a friend in his youth, and tells Elio that the love he shared with Oliver was rare.

Fans wondered if Stuhlbarg’s character was closeted. When asked for his opinion, RuPaul said: “It was left for the viewer to decide. Maybe he had, maybe he hadn’t, maybe he had unrequited.

“I think it was important to not be specific, so that you could underline and emphasize the feeling over was he or was he not. I think it was more important that director Luca Guadagnino left it ambiguous. I thought that was very smart.”

For Best Supporting Actress, Ru said he wanted Laurie Metcalf to take home the golden statue for her role in the acclaimed coming-of-age drama Lady Bird: “She so deserves it. Her performance is exquisite.”

In addition to Call Me By Your Name and Lady Bird, Ru said she surprisingly loved Dunkirk: ““It was the movie that I wasn’t attracted to seeing, because I sort of thought, ‘Oh, a war picture’.

“But then when I saw it on the airplane last week, I got it, and it’s so beautiful. It is so fabulous what [director Christopher Nolan] did.”

RuPaul’s current show – All Stars 3 – features fan favourites from across seasons of Drag Race competing for a second chance (and in some cases, third) at becoming America’s Next Drag Superstar.

Watch the queens serve their finest golden eleganza in the trailer below.