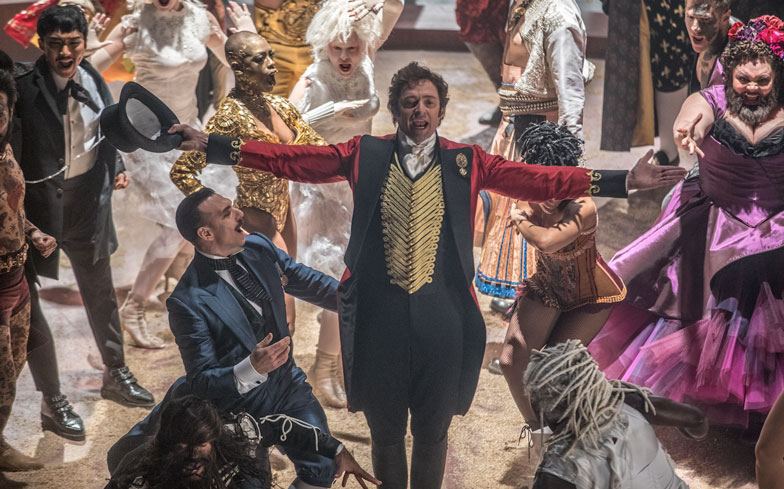 Directed by Michael Gracey, The Greatest Showman is a bold and original musical film that celebrates the birth of show business and the sense of wonder we feel when dreams come to life.

But it wasn’t just the lives of the cast involved that have changed since its release, as actress Keala Settle – who plays the Bearded Lady – revealed about one young LGBTQ teen who was struggling with their sexuality.

Related: Zendaya: People need to stop telling us who we should love

“I got a message the other day from a man who is gay and was about to take his own life,” Keala reveals exclusively to Gay Times. “He sent me a thing saying, ‘I heard your song and I took the gun down.’ I wept.

“It’s that kind of impact that gives me goosebumps to tell you that because it makes me realise, again, not only does that young man have stuff in themselves to last a lifetime and let  shine, but I do too because of what he told me I’d given him – that I didn’t even know. It’s that type of impact that’s being made.”

“We are universally in a time where things are very negative,” Keala continues when referencing the current political and social climate. “There’s a lot of anger that is going on and, not so much fighting, but that it’s getting really, really personal – attacking individually and collectively on another level.

“What the film has done – as well as the music – has given everyone a free pass to let all that go, and that pass is almost the ultimate fast pass for any ride you could ever go on. Not only does it give you that pass, but it lets you relish in the fact that what is happening to the characters in that film, and the stories that are going on in the film, are all relatable – no matter what year we are in, who you are or what you are.”

But what does the voice of This Is Me think of the suggestion it has become a modern LGBTQ anthem?

“I couldn’t be more honoured and privileged,” she beams – much to our enjoyment. “It’s one of those things where this community of people are continually fighting and striving for not only equality rights but to feel like they are part of a community and have the lives they’ve always wanted to live because that is who they are!

“When the song was first released as a single at the end of 2017, my life started ringing off the hook and I didn’t know what was going on. I gave my first interview about eight hours after the song was released and they asked if I knew what type of anthem I’d created. I started to cry and said, ‘Errr… no, I don’t!’ I had no idea and didn’t realise.

“All of the fears that I had are in that song. Those fears aren’t going to go away, but what’s so comforting and continues no matter what I’m doing daily is the likeness with each individual that’s touched by the song. That’s what blows my mind and I had no idea.” Inspired by the ambition and imagination of P.T. Barnum, The Greatest Showman tells the story of a visionary who rose from nothing to create a mesmerising spectacle that became a worldwide sensation – championing the power of the underdog and those that feel different.

And while The Greatest Showman follows the life of an aspiring man who dreams of a better life for his family, Keala tells us she took a slightly different message from the movie.

“The moral of the story for me is that you shouldn’t keep chasing and trying to be accepted by somebody else,” notes Keala before pausing. “In the words of RuPaul, ‘If you can’t love yourself, how the hell you going to love somebody else? Can I get an amen?!'”

She adds: “It’s about not seeking permission for somebody else to tell you that you’re worth it – ever.”

“When I saw that first clip, I said ‘Oh my gosh, this really is a game-changer. It really is a life-changer.’ This wasn’t just changing my life but is continuing to change the lives all around the world, so when I first saw that I bawled because of how much was coming out of her. I’ve seen others since and it’s just breathtaking, and it makes me so happy that people can find who they are in themselves absolutely perfectly.” Caught in great laughter when recalling how the filming of This Is Me was repeatedly stopped and started due to the cast caught singing along when they shouldn’t, Keala tells us why the song meant more to her as an individual than as an actress.

“I’m not going to lie… I’ve felt different since I knew how to feel,” she begins quietly. “That’s one of the reasons why I first didn’t want to do the song because of facing my fears.

“Even in the rehearsal space before the presentation to get the movie greenlit, I didn’t want to do it. I was petrified. That meant that I had to know that I’m good enough to stand in front and sing by myself – not hiding behind a brunch of Broadway costumes or lights. I had to do that, and I still freak out about it.”

With a movie that asks people to look beyond what society would deem as ‘different’, Keala faced a small number of remarks during the initial movie release, explaining: “I think in the beginning when I was promoting it, everybody was like ‘who is this fat chick? She has no business.’ I didn’t even think about it because I had a beard on, but thanks for throwing that into the fire.”

“It was interesting with the following that I now have –  and am very grateful for – that they are warriors and are not only fighting for each other and themselves, but fight for me which is humbling. I’ve never really seen anything, and I’m sure it has been around all over the place, and humans will be humans – nor will I want to.” And a stage transfer? Keala is totally game for it happening when we inform her that co-star Hugh Jackman has revealed he’d like to see it happen.

“He said that?!” she questions with great delight. “I’d love to, but I know how hard it was to tap into it just for the film.

“For a Broadway production, which you may know is eight shows a week, it’s raw and it’s full out. It’s the film for two and a half hours, eight shows every week if that did happen.

“It’s a lot of work, but hey, he’s [Hugh Jackman] number one on the call sheet so if he wants to do it then heck… are you kidding me? I’ll have to be. He’ll send the car and be like ‘get in the car, let’s go.’ I’ll be there. I’ll do anything for that man. He’s the reason that I’m out here. He is the reason and the one. I had t-shirts made that say ‘It’s Your Fault Hugh Jackman’.”

And the casual Oscar nomination? “It’s interesting because it’s not totally mine,” Keala giggles. “It’s Benji and Justin’s and I’m really aware of that. I’m extremely happy to be participating in that and getting to say those words as it’s something I’ve always dreamed about. To actually see it come to tuition, as I never thought I would, is very fantastic.”

Laughing that she’d totally be up for ‘doing an Adele’ and splitting the Oscar with her musical co-stars like the British singer famously did with Beyonce last year, Keala does have one name she’d like to meet at the coveted awards ceremony later this year.

“I’m excited to be there and hopefully Meryl Streep will be on the front row – that’s all I care about,” she giggles. “I just had an awards ceremony I went to Stateside and Dame Helen Mirren was being honoured and I did have to do an acceptance speech in front of her and I couldn’t. I didn’t know how to talk, actually! So mid-way through the acceptance speech, because I had nothing prepared, I just sang it!

And with that, Keala cleared her throat and gave us a first-hand example of why she should probably start clearing some space on her mantlepiece for a looming Oscar…

The Greatest Showman is out in cinemas now – including special sing-a-long performances. More information can be found here.