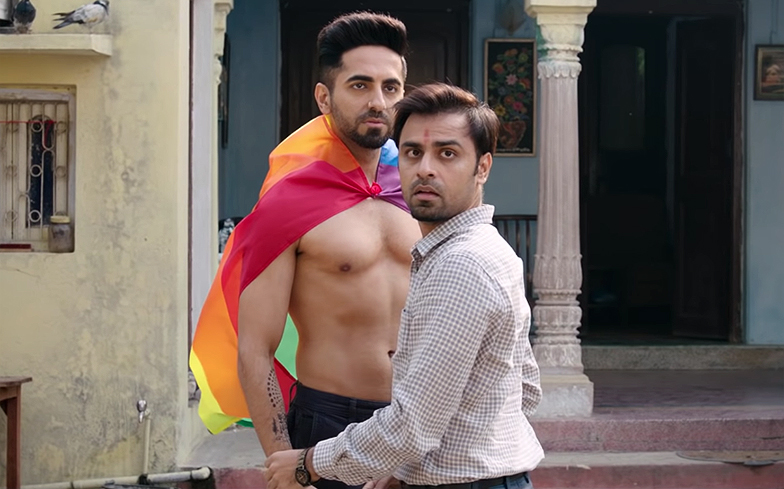 A new Bollywood movie is hoping to change minds about gay people.

Hindi romantic comedy Shubh Mangal Zyada Saavdhan (Extra Careful of Marriage) hits cinemas in India this Friday, and is making headlines for featuring a same-sex romance and portraying homosexuality in a positive light.

The film follows Kartik (Ayushmann Khurrana) and Aman (Jitendra Kumar) as a couple who try to win over Aman’s parents, who are struggling to accept that their son is gay and want an arranged marriage for him.

“We’ve seen a lot of films that have dealt with homosexuality, but they’ve mostly been parallel cinema or for festivals,” the film’s star Ayushmann explained in an interview with the New Indian Express.

“Shubh Mangal Zyada Saavdhan will be the one that will penetrate the masses and reach out to the homophobes.”

Following the 2018 repeal of Section 377 – a British colonial-era law that criminalised gay sex in India – it’s hoped that the film will help change social attitudes towards LGBTQ people, especially among the older generations, with the help of humour.

“Most people in the LGBTQ community have difficulty talking to their families,” continued Ayushmann.

“The biggest obstacle is the family. They are conservative, non-progressive, closed off. I believe our film will be the first step towards opening up a conversation.

“It’s made for the boomer generation, the generation that thinks it’s unnatural to be gay. However, it’s all been packaged as a popcorn entertainer.”

Watch the trailer for Shubh Mangal Zyada Saavdhan here or below.