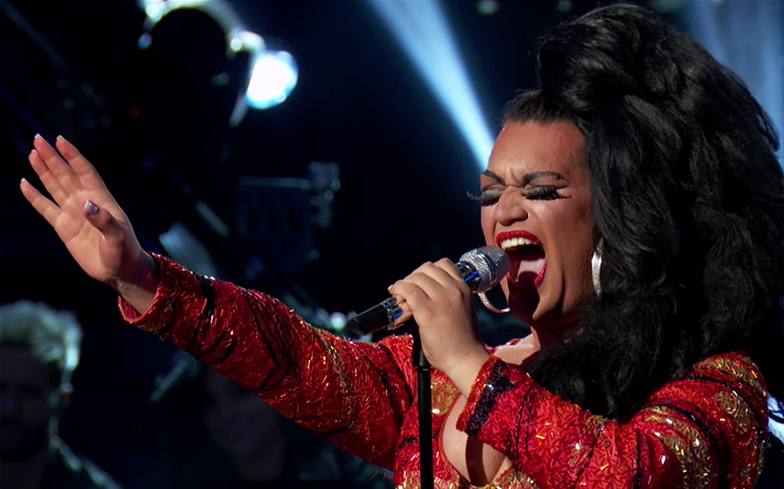 This drag queen’s got talent, henny.

24-year-old Adam Sanders was rejected during the show’s 12th cycle back in 2013, but now he’s returned for the reality show’s latest season as his sassy, glamorous alter-ego Ada Vox, and we’re already obsessed with her.

After making it through the audition process last week, Ada earned herself a standing ovation on Monday night’s episode, which saw her perform a cover of Radiohead’s Creep in an attempt to make it through to the Top 24 of the competition.

The haunting rendition earned her a standing ovation from judges Lionel Richie, Katy Perry and Luke Bryant, and she later returned out of drag as Adam to find out whether or not he would be continuing on his journey.

“I wanted to face you all as myself, without the garb. I wanted you to see who I truly was,” he explained to the trio of judges, before being told that he had indeed made the Top 24.

“I’m glad you showed up in your true form, because I want to tell your true self that the dynamic duo will be going forward,” said Lionel.

Could Ada become the first ever drag queen to win American Idol? It’s not unbelievable. With RuPaul’s Drag Race helping bring the art form to the mainstream, and Courtney Act becoming the first drag winner of Celebrity Big Brother this year, anything is possible.

You can watch the show-stopping performance below.

During his audition, Adam revealed to the judges that after his elimination from the top 50 back in 2013, he was bullied for his size and sexuality, which “killed” him inside.

“It killed me almost as much as the people who were telling me that I should kill myself,” he said. “Through all of the negativity, I have managed to build myself up as a new person, a stronger person.

“I have recreated myself in ways that I could not have imagined. I am so ready to show everybody, to show all of America, to show these judges, who I am now, and I can take anything and everything that comes my way.”