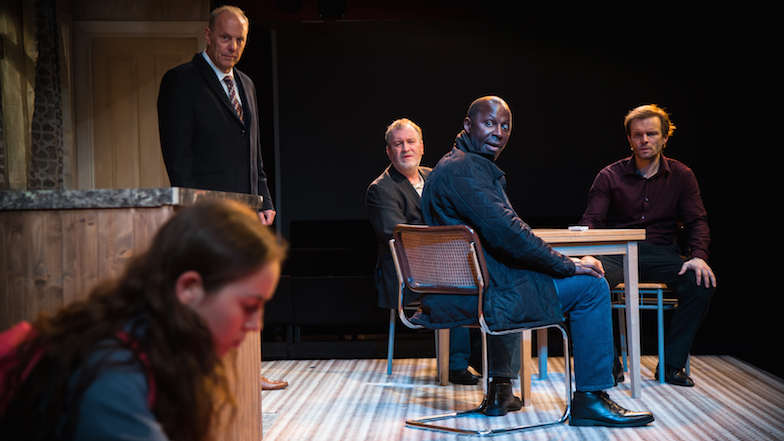 The Weatherman is billed as a dark comedy drama, but really that description could just be reduced to dark – very dark indeed. There are a handful of laughs but they’re thinly spread during a play which is almost relentlessly bleak. It focuses on the lives of O’Rourke (Alec Newman) and Beezer (Mark Hadfield), two ill-suited housemates sharing a cramped, run-down London flat. In exchange for six months’ free rent they agree to look after a mystery package for their dodgy landlord Dollar (David Schaal).

The mystery package turns out to be Mara (Niamh James), a Romanian girl abducted and brought to the UK illegally. She is to be minded by Dollar’s sidekick Turkey (Cyril Nri), who will drive her to and from jobs; otherwise she is to be looked after by O’Rourke and Beezer. Although it’s never explicitly mentioned, and as much as her captors are trying to dissuade themselves from reality, the assumption is that Mara is in the sex trade.

It’s frequently a difficult watch – modern slavery doesn’t lend itself naturally to humour, and although there are a few entertaining lines the focus is very much more on dark than comedy. It’s an intelligently-written piece with some great moments, however. It feels very much like it’s been written for the actors – each is afforded an opportunity to shine, and each absolutely takes it. In particular, O’Rourke’s confessional to Mara was extremely powerful, deservedly eliciting a smattering of applause from the audience mid-way through the second act.

As fantastic as the acting is, and as poetic as the text may be, The Weatherman is certainly not an easy watch. It’s a chilling concept for a play, with the tone starting off dark and continuing to get bleaker as the evening progresses. There’s much here to recommend – it’s a smart, topical and challenging play, placing a horrifying situation into a believable and relatable context – but we’d advise getting your expectations in the right place before making the trip to the Park Theatre. It’s an incredibly powerful piece, but we’ve not felt this uncomfortable watching a play for quite some time.