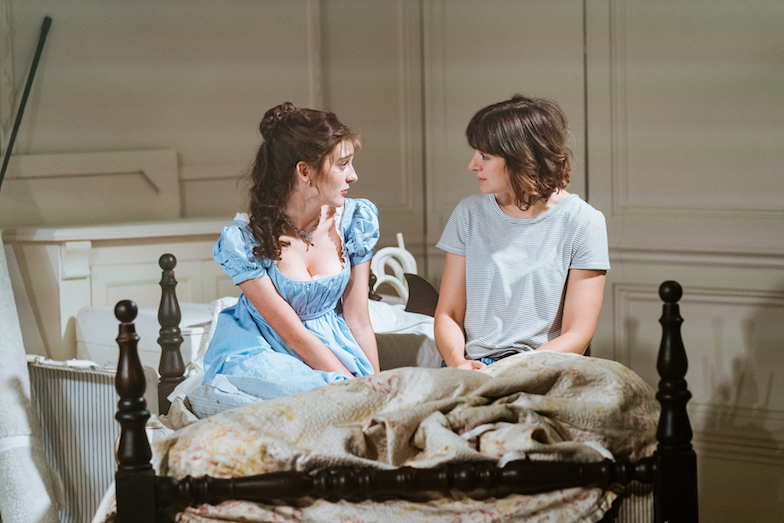 Laura Wade’s new play, based on the unfinished Jane Austen novel of the same name, has opened at the Menier Chocolate Factory, directed by Samuel West.

It’s been quite a year for playwright Laura Wade. Following on from the Olivier Award-winning Home, I’m Darling, her latest play has transferred to London after a successful run at the Chichester Festival Theatre. Based on Jane Austen’s unfinished novel dating from around 1803, it concerns the story of Emma Watson, a 19-year-old who has been cut off by a wealthy aunt and is now seeking a husband before her ill father passes away. Austen’s novel only takes us as far as Emma being introduced to a number of potential suitors, at which point Laura quite literally steps in.

Part way through act one, a house maid intervenes during one of Emma’s exchanges with a prospective match; she breaks character and reveals herself to be Laura, a playwright with an interest in Austen’s work. She wants to understand why the story was abandoned and tries to work out what should happen next for the characters. From this point on, the remainder of the play is a tad unconventional; Laura is ever present, trying to figure out what to do next, often at war with the rest of the cast who actually seem rather keen on the idea of self-determination.

It’s a smart and self-knowing show full of wonderfully meta moments. When Laura first breaks the news, Emma needs some time, so goes for a walk. Surveying her audience, and knowing we could be sat there bored as nothing is happening on the stage, Laura winds the clock forward to denote the passing of time. When Emma returns from her walk, she is disappointed to learn that the world beyond the estate hasn’t yet been written. This is just one amusing moment in a play which turns out to be a rather surreal satire.

The Menier is an intimate space, and the large cast and occasionally busy set do seem a little out of place on such a small stage (perhaps an indication that a bigger one is to come). Samuel West does a commendable job of directing given the limitations, although it would benefit from a larger stage. The actors cope admirably, too – there are several impressive performances. Grace Molony is believably earnest as Emma, Joe Bannister entertains as the hilariously awkward Lord Osborne and Jane Booker expertly delivers some deliciously devastating insults as Lady Osborne.

The Watsons is an unusual premise for a play and it took us a little while to warm to it completely – but when we did fully buy into its concept, we ended up really enjoying ourselves. Laura Wade’s surreal adaptation is probably the most fun we’ve ever had with Jane Austen, with the resulting play turning out to be a wonderfully witty satire.