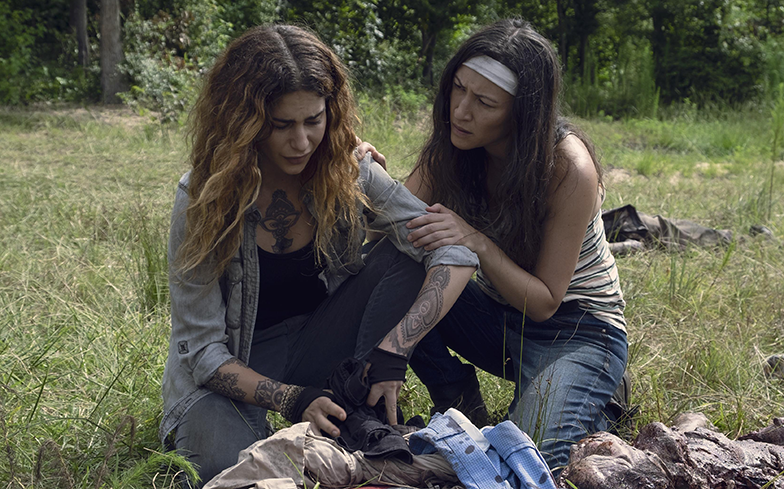 “I’m delighted to be representing where I think television and actually all platforms and media needs to be going.”

The Walking Dead star Eleanor Matsuura says she championed for diversity on the critically-acclaimed AMC series.

Matsuura joined the show in the ninth season as Yumiko, alongside Nadia Hikler, who portrays her girlfriend Magna.

However, since their debut, the characters haven’t been intimate with each other, which has received backlash from the queer community, who claim the producers of the series are trying to erase their sexual history in the comics.

“Obviously in the comics, it’s obvious that they’re a couple. But we wanted to make sure that it was also obvious in the show.

“So we fought really hard to have a kiss between us included in one of the later episodes, so we’ll have that to look forward to!”

She added: “We feel very proud to be representing the LGBTQ community. I feel a responsibility about it. “I don’t take it lightly. I’m delighted to be representing where I think television and actually all platforms and media needs to be going. I’m happy to be part of it.”

Because she’s of Japanese descent, Matsuura said she’s “forced to think about representation”.

“For so long, my casting was always, the best friend or the scary boss,” she explained. “It was never really lead characters. For so long, Asian actresses were never really considered for those parts.

“So I’ve been forced to think about it a lot, and I feel incredibly lucky and honoured to be joining a team and doing my bit to represent the diversity that you see on screen.

“I will just say that, there’s a wonderful moment where you see Yumiko really go on a journey – an emotional journey within herself. You see a little bit more of that side of Yumiko, a little bit of her past. That’s probably all I can really say!”

Last year, former star Tom Payne admitted his disappointment with the lack of gay storylines for his character.

The American actor played gay character Paul ‘Jesus’ Rovia on the horror series for three seasons, and made his exit during the show’s episode, Evolution (25 November).

In the comics, Jesus embarks on a relationship with Aaron – who is portrayed by Ross Marquand on the series – and his sexuality is explored in much more depth.

When asked by The Hollywood Reporter about the character’s departure, Tom said: “It’s been so amazing to be a part of that community and to give visibility as a gay character on one of the biggest television shows ever.”

He then explained that he was disappointed that Jesus’ wasn’t provided with a prominent gay storyline.

“It was an amazing responsibility, and I was happy to take it on,” he admitted. “But I was disappointed it wasn’t in there more.

“It wasn’t ever even explicitly mentioned. [Jesus’ sexual orientation] was just one scene with Lauren in season seven.”

Tom said there are still viewers who were unaware of Jesus’ homosexuality because of his lack of storylines.

“It’s a shame,” he opened up. “He was such a badass character. They could have made more of it. It’s really Robert Kirkman who was so amazing to do it in the comic books.

“I was super excited to play that. I wish they made a bigger deal of it. But other storylines take precedent, I guess.”

The ninth season of The Walking Dead will return 10 February on AMC in the United States. It will then be available on UK streaming services such as NOW TV.