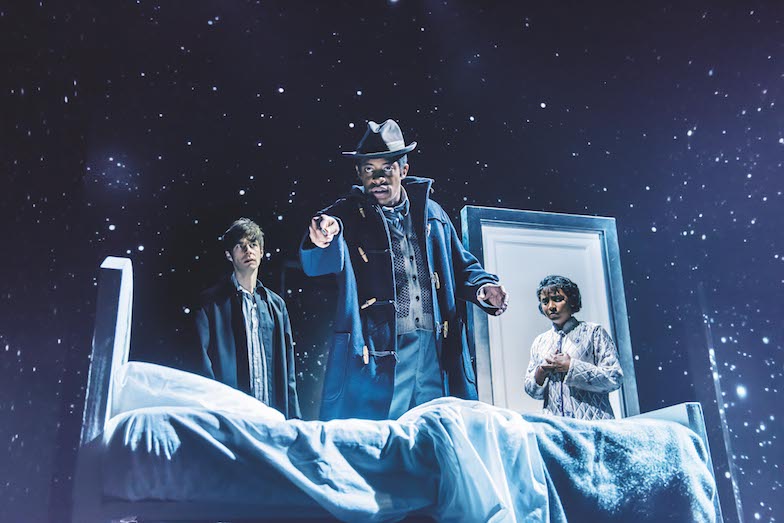 Anne Washburn’s adaptation of the hit CBS show has transferred to the Ambassadors Theatre, directed by Olivier award-winner Richard Jones.

It’s rare to see sci-fi on the stage, so we were intrigued by the possibility of exploring the fourth dimension in the west end, following The Twilight Zone’s successful initial run at Islington’s Almeida Theatre. Based on eight episodes from the CBS series which ran from 1959-1964, we’re treated to a variety of short stories involving space travel, alien invasion and a whole host of weird and wonderful ideas besides.

The production of the show is excellent – everything here is slick and there’s some wonderful visual trickery. There is an amusing running gag involving the appearance of cigarettes; items levitate across the stage or vanish into thin air; the composition of a photograph on a newspaper cover changes before our very eyes. It’s genuinely impressive stuff to watch, on occasion eliciting audible gasps from the audience. The spinning eyes and doors which permeated the performance felt akin to watching a live-action Dali artwork; it was all wonderfully surreal.

Unfortunately we just didn’t really enjoy the play itself all that much. Structurally it’s rather chaotic, with eight stories told over the course of two hours, the show chopping and changing between narrative strands every few minutes. Not only did several of the stories feel underdeveloped, but the scene would change before we really had a chance to engage with what was happening on stage. It had its moments – there was an amusing song and dance number just before the interval, while act two boasted a compelling argument about the meaning of being American – but too many of the other scenes were forgettable.

We felt that the acting played second-fiddle to the production, too. While most of the performances were reasonably solid, some were comical – and not in a good way. It was a real struggle to engage with many of the characters due to the narrative structure – the scene would change before we’d really bought into them.

Ultimately, The Twilight Zone is a rather underwhelming adaptation of the cult TV show. From a technical perspective it’s absolutely first rate, but that’s about as far as the accolades go – sadly there’s precious little else here to recommend.