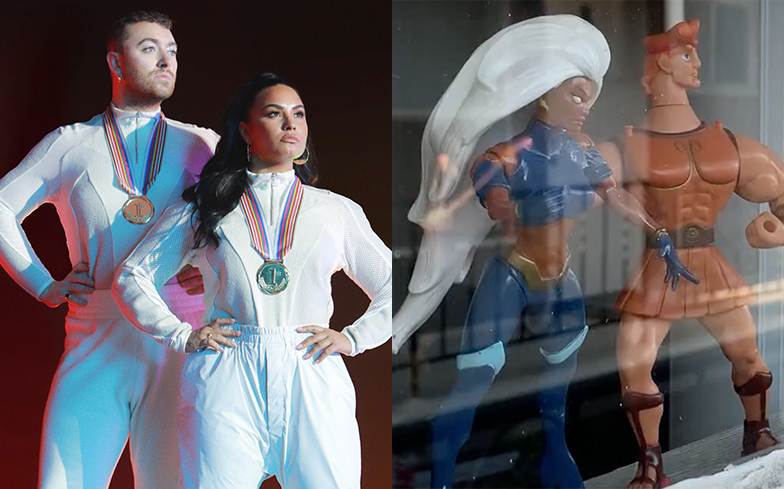 “I am SCREAMING,” said Sam.

Jake Wilson has left Sam Smith “SCREAMING!” with his take on their I’m Ready music video.

The visual for the Demi Lovato-assisted dance-pop anthem was released last week to universal critical acclaim, and follows the two pop superstars as they “celebrate LQBTQ in all its forms” for the queer Olympics. (Sign us up!)

To celebrate its release, Jake – who has directed for major artists in the past such as Cher, Lizzo and Kacey Musgraves – has used his time in self-isolation to create an official “toy version” with Hercules and Storm.

The incredible visual was met with praise from stars such as Ashley Roberts, Gus Kenworthy, Hannah Lux Davis, Jojo, and of course, Sam, who shared it with their followers on Instagram, saying: “I am SCREAMING.

“My dear friend @jakewil has made this video for me and @ddlovato’s song. The thought of you making this during isolation makes my heart cry. I love you so much babe. You’re so fucking clever and brilliant.”

Jake was inspired to created the video because like most of us, he’s been “alone” in his apartment, itching to be “creative”.

He tells Gay Times: “I came across a few action figures on my bookshelf and got the idea, with the song playing in the background. What I thought could have been completed in a weekend, ended up taking over five days of filming and editing.”

When it came to casting the roles, Jake chose X-Men’s resident weather queen for Demi because “she has such star power” and Hercules for Sam because the Disney character is an “ultimate hero, like Sam is to so many.”

Jake hilariously reveals that he ran into problems on set, problems he’s “never had with actors before”.

“Like Storm falling over mid-take and knocking down half of her castmates… or me spending 90% of the shoot literally laying on the floor as our “locations” were primarily on the ground,” he explains.

“But then I also ran into problems I have on normal shoots: like losing daylight through my blinds as 20 toys and a tripod were setup in their precise places, meaning I’d have to pick up filming the following day.”

Despite all the difficulties, Jake says he had “such a blast” making the video, calling it the “perfect quarantine project”.

Well, we had an absolute blast watching it, and we’re sure you will too – watch Hercules, Storm, Quasimodo, Rogue, Britney and several other icons pay tribute to Sam and Demi’s music video to I’m Ready below.