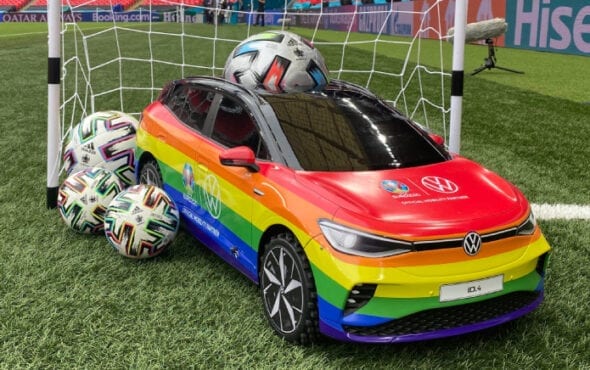 The Euro 2020 “Tiny Football Car” will be decorated in Pride colours at the highly anticipated final between England and Italy.

The Pride announcement was made via the car’s Twitter account which featured a photo of the mini Volkswagen SUV on a football field.

“I’m so excited for Sunday’s Final, especially since I just tried on my new kit! Do you like it?,” the post read.

Football fans were first introduced to the tiny car during the Italy and Turkey match. The mini VW was sent on the field to deliver the ball to the referee.

Since its first appearance, the football car has become a popular staple during the Euro 2020 matches.

Volkswagen also released a statement via their Twitter account that featured a video of the LGBTQ+ inclusive vehicle in action.

“Ready, set, charged! With pure pride. For the final match of the #EURO2020, let us all share nothing but love. Together! #WeDriveDiversity,” they tweeted.

Fans have taken to Twitter to express their excitement and support regarding the Pride VW.

One person hilariously wrote: “Would lay down my life for the tiny rainbow car.”

Another fan said: “Never thought a car could bring so much joy and love to the world!”

Over the course of the Euro 2020 tournament, LGBTQ+ support has been seen from players and fans alike.

Even though there has been progress in queer allyship, the tournament has also seen its fair share of controversy regarding LGBTQ+ Pride.

On Friday (2 July), UEFA told the car manufacturing company that concerns about the “legal framework” around LGBTQ+ support in Russia and Azerbaijan prompted the decision.

At the end of June, Munich was denied the opportunity to light up its stadium in rainbow colours during Germany’s match with Hungary.

Dieter Reiter, Munich’s mayor, wanted to light up the stadium in protest of the current anti-LGBTQ+ legislation that the Hungary government is imposing.

But even though they were banned from lighting up the stadium many fans wore rainbow colours and flags in support of the LGBTQ+ community.

Ready, set, charged! With pure pride. 🏳️‍🌈
For the final match of the #EURO2020, let us all share nothing but love. Together! #WeDriveDiversity pic.twitter.com/GeKaniM4PP

would lay down my life for the tiny rainbow car https://t.co/LLg1KMgElh