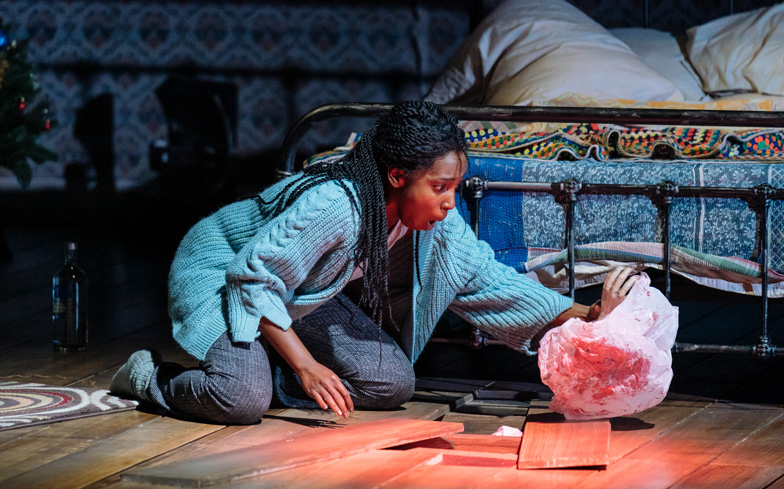 Anthony Neilson directs this newly-staged adaptation of the classic short story in the intimate space of the Dorfman Theatre.

For those unfamiliar with the original Gothic horror, The Tell-Tale Heart focuses on the story of a man who kills his landlord and gets away with the murder. Finding himself racked with guilt, he subsequently confesses to his crime. This new rendition, written and directed by Anthony Neilson, follows a broadly similar narrative but is expanded upon and is much more complex.

This new retelling focuses on the life of a playwright, performed by Tamara Lawrence. She is suffering a bad case of writer’s block following a surprise success with her debut play, and with a deadline from the National Theatre looming for her second work, she decamps to Brighton in order to escape London’s distractions and focus on her writing. She rents a room from a rather eccentric landlady (Imogen Doel) and the two forge an unconventional bond. David Carlyle completes the cast as the police detective investigating the landlady’s subsequent disappearance.

Elements of the play work extremely well, particularly the technical aspects. We enjoyed the film-style sequence towards the beginning, and the backgrounds we could see through the windows – a number of scenes had a wonderfully cinematic quality. We appreciated the shape-shifting stage, too, and the lighting was extremely effective throughout – one segment saw the audience bathed in a moving blood-red spot light which was full of suspense; we couldn’t wait to see what would happen.

There were aspects of the play we weren’t completely sold on, however. The dual narrative, play-within-a-play structure wasn’t as successful as it could have been, and the false ending didn’t feel at all satisfying. The genuinely creepy moments of the performance didn’t gel well with the silly schlock horror scenes, either – in places it felt like a bit of a mess, not really knowing if it was being played for laughs or genuinely trying to be scary. The huge variations in tone meant it never really captured the intensity of Poe’s short story.

It’s a shame as there are evidently good ideas here and some of them work effectively – but some of them just don’t work very well together, resulting in a slightly messy production. It has some creepy moments for sure, and it’s certainly never dull, but it never quite feels as though it comes together cohesively. The Tell-Tale Heart is a show concept with a lot of potential which isn’t entirely fulfilled.