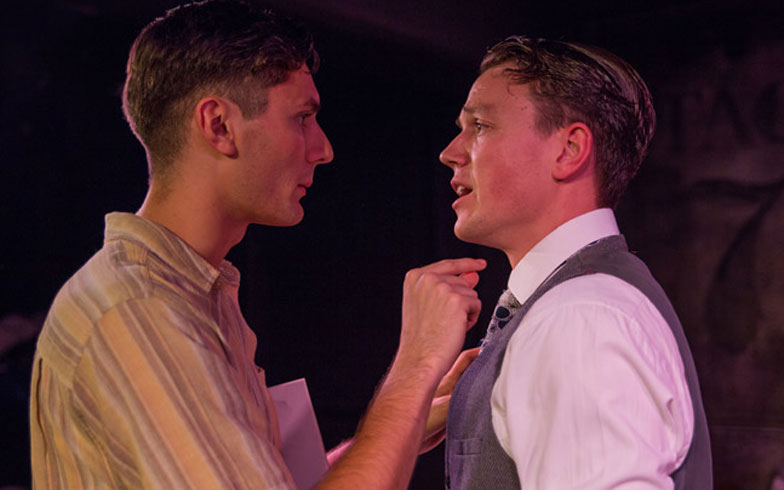 The Tailor-Made Man tells the fascinating story of silent film star William Haines, an openly-gay actor fired by Louis B Mayer – one of the co-founders of MGM – for his refusal to hide his sexuality. Set in a world of sleaze, sex scandals and open secrets at a major Hollywood studio, it also couldn’t be more relevant today.

The real star of the show is the story – William Haines’ is one that is little known, as Mayer systematically attempted to erase him from his studio’s history. He was written out of any future productions, his existing films pulled from release and his former movies locked in a vault; his studio stills were destroyed and the other major studios contacted to advise of his ways and instructed not to work with him. The Tailor-Made Man documents William’s time at MGM and his subsequent career and personal life after acting.

Thankfully this play does a commendable job of retelling this interesting and thought-provoking tale. The acting is strong throughout – and while there are many notable performances, we were particularly taken with Tom Berkeley’s thoughtful and sensitive portrayal of Williams’ partner Jimmy Shields. Whether in the heart of the action, or narrating one of the documentary-style interludes, his story feels authentic, an insightful voice of reason amongst a world of madness.

From a production perspective, the limitations of this tiny theatre mean that the staging has to be fairly minimalist, but the space is utilised to good effect. The 1920s-style furniture feels authentic, while different spaces are created on stage with the movement of the camera, drawing the audience’s attention to varying corners of the set. It’s simple but highly effective. There are a few neat touches that really make us feel like we’re on a film set, too, like the calls of “action” or “cut” which bookend the scenes.

There is plenty to recommend about The Tailor-Made Man. It’s a fascinating story that deserves to be better known, and this rendition features some strong acting and clever production. For those interested in finding out more about William Haines we’d gladly recommend this night at the theatre.