The students of Prime Video’s Lovestruck High reveal their red flags: “Get with the times, girl!” 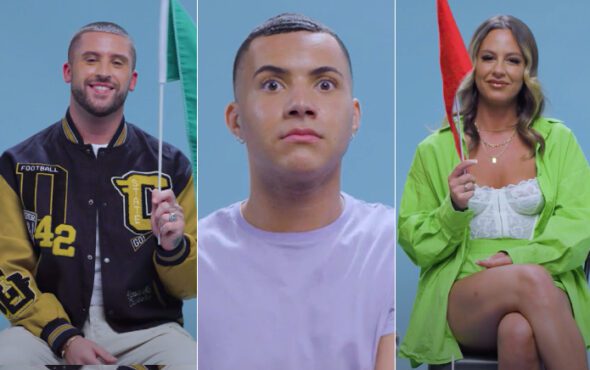 To mark the release of Lovestruck High on Prime Video, the singletons have shared their most desired (and undesired) traits in a romantic partner.

In an exclusive video for GAY TIMES, Alex, Chante, Dan, Huss, Jody, Junaid, KT, Megan, Theo and Yasmine reveal their deal-breakers in a relationship, such as a love interest’s texting habits, their relationship with their ex(es) and – this one proved very controversial – how often they change their bedsheets.

“I hate going round to boys’ houses because I’m like, ‘What if they haven’t changed their crusty bedsheets?’ Or it’s when they have a really thin pillow!” squeals Megan, which elicits an equally nauseated response from Junaid. (Honestly, same.)

For Theo, constant use of the crying laughing emoji is a major “ick”. He says: “Get with the times, girl!” Huss and Yasmine, however, think it’s one of the ‘sickest’ emojis, with the latter questioning: “Do people really think that’s a red flag? What would the reason even be?”

If Jody doesn’t receive a good morning text from who she’s dating, she’ll assume “you’re in bed with someone else”. Dan agrees, stating: “Foul mood ‘til I get a text from you.”

Watch the video below to discover which characteristics are red or green flags for the class of Lovestruck High.

Lovestruck High follows a group of UK-based singletons as they look to find “the one”.

Narrated by the Lindsay Lohan, the series was filmed in the UK, but pays homage to classic American high school movies of the 90s and 00s.

The eight-episode series culminates with one couple walking away with a cash prize of £100,000. But – and there’s always a ‘but’ isn’t there? – not all of the students will make it to the grand finale, as some of them will face expulsion.

An official synopsis from the streamer reads: “These students won’t be going back to any school as they’re fulfilling their teenage fantasy and entering the nostalgic picture-perfect world of an American high school in their search for love.

“From taking a seat at the cafeteria, to homecoming, to cheer tryouts, Lovestruck High creates a perfect backdrop for finding friendship, flirting and falling in love.”

Upon announcement, Lovestruck High was met with praise for its racial and sexual diversity, with eight out of 15 students identifying as a member of the LGBTQ+ community.

Ahead of the premiere, GAY TIMES spoke with all eight queer students of Prime Video’s brand new series about this inclusive new era for the reality dating genre, which you can read in full here.