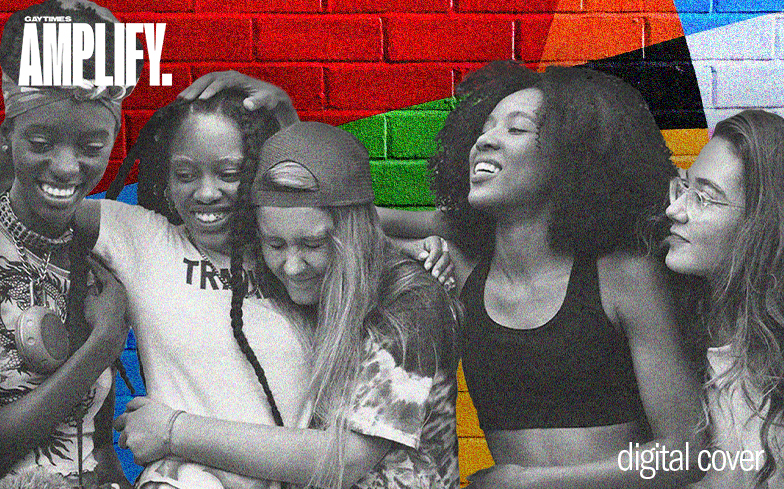 HBO’s new series is one of the freshest comedy-dramas of the year.

Betty, a continuation of writer and director Crystal Moselle’s acclaimed pseudo-documentary Skate Kitchen, follows the lives of a group of young female skateboarders in New York City and their attempts to stand out in a male-dominated sport.

When they’re not smoking weed or performing flips and tricks on their skateboards, the series sees the characters delve into societal issues such as race, gender, class and sexual assault. The beauty of Betty is how these serious conversations aren’t sensationalised for television. It’s an authentic portrayal of the struggles faced by young women in 2020.

“These things need to be talked about even if it’s hard,” explains Dede, to which Ajani adds: “There were a bunch of things we wanted to address because it feels like the media doesn’t deal with it in an emotionally safe way.”

Ahead of Betty’s premiere on HBO, we caught up with Ajani, Dede, Rachelle and Moonbear to discuss how their real-life experiences impacted the series, and the importance of exploring female perspectives in male-dominated industries.

The characters on Betty are all based on yourselves, so what kind of research or preparation did you have to do to step into these roles?

Rachelle: We had a lot of consultants on the show and we were there the whole time the characters were being created. For Camille, I was part of the process of who she was going to be. I went to the directors and writers to figure out who she is, how she’s similar to me and how she’s not.

Moonbear: We spoke to the writers about what we like and don’t like for them to work on. We went back and forth between New York and LA and the writers would observe us, and that would help them get feedback.

Dede: I wanted to push Janay away from me. That way, there was a difference between us and I’m not playing a version of myself. I didn’t want to just play me, because that’s how you grow and that’s how we’re supposed to grow. In preparation for that, I had to make a lot of character decisions for her. I wanted to make them separate from what I would do. I had to ask myself, ‘What does her family look like? Does she have a dad? Does she have a mom? Who are her close friends? Why does she love skateboarding?’ I had to make all these choices for her.

Ajani: Indigo’s personality is closer to me than her life circumstances. The way I approach the character is that I place myself in her position. How I would react to it, would she react the same way? Her character is more confident than me! What I think is taken from me is how much she loves her friends, how she can get caught up worrying about them and not taking matters into her own hands. She loves people to a fault, and it gets her into some… sticky situations.

Gender roles within skateboarding hasn’t been explored much in mainstream media – why is it important to bring a female perspective to what’s often seen as a male-dominated sport?

Moonbear: I think it’ll show that there’s different kinds of communities and that girls are coming up in the skateboarding world.

Dede: Like you said, it hasn’t been explored. It hasn’t had the opportunity or the platform to be talked about or shared. It’s very new, in a way. It’s always been a male-dominated sport and I feel like a lot of the culture that we’ve experienced, there’s a different lifestyle and story.

Ajani: I think it’s important to place women in ways they haven’t been represented in before. Representation is so important because, growing up, I didn’t have any female skateboarder role models. I got into skateboarding at 17 when I met Nina [Moran] and Dede. Nina gave me my first board after I said to her, ‘It’s so cool that you skate’ and she replied, ‘Why don’t you skate?’ I didn’t even know, I was just scared! She brought me my first board and I’ve been skating ever since. I kept believing myself and going for things that I’m passionate about, and not letting those reservations of, ‘Boys are going to make fun of me’ get to me. You just have to go for it.

Dede: As people grow and as the times change, these stories and experiences need to be shared and should be shared. It also makes everyone else aware of what’s going on, how people feel and some of the things that people enjoy doing. People, not girls or guys, just what people doing and how they can bond over this one thing.

Do you think you’ve ever seen a television show like this before, that feels grounded and natural and focuses on positive relationships with a group of diverse women?

Rachelle: I don’t think there’s anything quite like this!

Moonbear: No, not really. There have been shows that have rode with it. I have seen some that are set in New York City, but not on the skateboarding community itself.

Dede: That’s a hard question for me, because while I do watch television and I try and keep up with new shows, there’s so much content and it’s hard to keep up with it sometimes! I don’t feel like there’s been a show in this narrative before. There have been narratives or girls hanging out and enjoying themselves, exploring relationships and sexuality, but seeing that through skateboarding is really different. It’s not that prominent and I haven’t seen it. I could be wrong! There could be something out there.

Ajani: When I watched it, I couldn’t really think of anything with the same type of message. Crystal is a documentary filmmaker, originally, and seeing her transition to this felt really natural. I think it’s unique because we all have a relationship prior to filming. We met Crystal years ago and she started hanging out with us. She’s become such an important part of my life, and I admire her for bringing our story to this platform, perspectives haven’t been shared before.

Do you think we’re at a time now where television can’t ignore the need for diversity and queer representation?

Rachelle: Yes, of course, because that’s life. That’s how life really is. There’s people from all corners, all genders.

Moonbear: They’re trying to put in the generation that is like, here now. The generation now is very inclusive of everyone, I would say.

Dede: I think television should be a representation of reality. At the end of the day, you have people telling stories about their experiences and creating characters around their life events, but then you also have other fictional and superficial shows that have nothing to do with reality. In terms of those narratives that people want to talk about, I definitely think it’s important and necessary that everyone contributes to that reality and it’s not confined to one colour or sexuality. There’s an array of people out there who impact each other’s lives each and every day.

Ajani: Personally, I don’t watch a lot of television because I like cartoons! Watching people on TV, I often find that there’s not many characters that I can empathise with. The way they’re shot or the plot, I’m often like, ‘What? What is going on? This would never happen, this is so dumb!’ I can’t take it seriously. But yeah, representation; giving little girls that don’t have those role models some female empowerment, it’s so important to have.

Betty also addresses serious subject matters like sexual assault in a way that isn’t sensationalised – why is it vital for authentic storytelling when dealing with such challenging experiences and issues?

Dede: Because of the fact that it’s challenging… but it’s real life. I think that’s simply what it is, these things need to be talked about even if it’s hard. It’s something that people actually experience and go through. Maybe they find that guidance through watching this show, seeing the characters deal with it or find a new perspective to a subject that they were previously close-minded to.

Ajani: These topics that we deal with, some of them come from our own experiences and some of them come from our friends’ experiences. When we got this show, we spoke to Crystal and there were a bunch of things we wanted to address because it feels like the media doesn’t deal with it in an emotionally safe way. The characters also deal with it together, which is really important. I also feel like it’s not necessary to make these problems the main focus, because it’s representing life.

Moonbear: When people think it’s too overdone, it’s put in a box where it’s like, not real. That can be harmful for everyone involved.

Ajani: It’s subtle, but just enough to break the ice into how bad it can go and how it can affect people. It’s important to have people there for you, that care for you. We just wanted it to be authentic and show the value of female friendship, especially in situations like that. Even if it’s minor, it’s worth addressing.

What do you hope viewers take away from the show?

Ajani: I hope you can laugh!

Moonbear: I just hope people enjoy it and actually get a chance to know about Skate Kitchen. I know that older viewers who aren’t necessarily into the culture now, it might put them off, but I want them to give it a chance because it might end up being something they like.

Dede: I hope people take away that there is a fresh sense of youth right now. I feel like there’s a negative connotation with a lot of younger people of this generation. I feel like people are always coming at us! I want them to take away that there’s this freshness to us, and it’s not all of this BS that they hear. There is substance! At the end of the day, people just want to be accepted for how they present themselves, and it may not go that way. You may present yourself as who you are and not be accepted. That’s something that’s real, but we all just want to feel like a part of something.

Ajani: I want people to see that they don’t have to do this alone, and they shouldn’t let themselves be overtaken by fear of what other people will think of them. It isn’t an option for us to not be united, especially during this tumultuous time in our racial, social and political climate. It’s okay to talk about these things. It’s okay to be yourself.

Rachelle: I hope young women look at us and think, ‘Wow, I can do that.’ I want this show to be the thing that pushes them to do it. Also, I want them to see that there’s this counterculture of skateboarders that is diverse. It’s not just guys!

What have you all learned from your experience on Betty?

Rachelle: I’ve learned to be more of a team player!

Moonbear: I already knew, but I would say that I like acting! It’s a challenge. I didn’t know that I’d want to continue, but after doing this, it’d be pretty interesting to see what else I can do.

Dede: I learned that acting is very therapeutic for me. It helps me with my self-confidence and everything that I internalise. I really appreciate that because I learned a lot about myself.