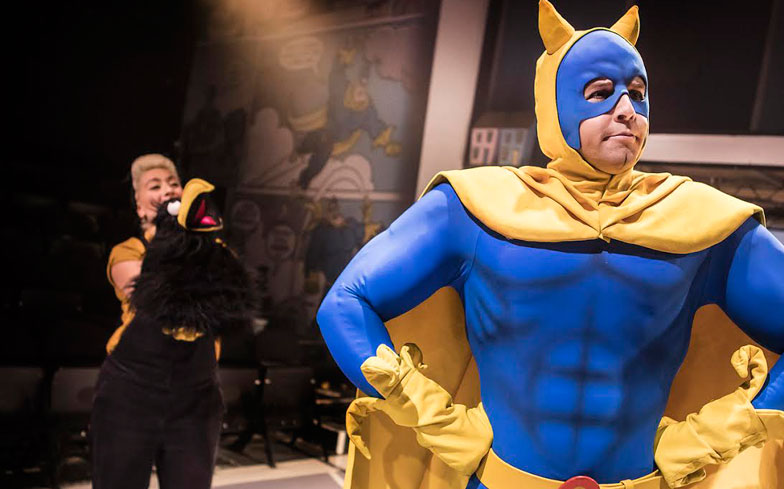 This musical version of the classic comic character does exactly what it says on the tin.

While some slight liberties appear to have been taken with the source material, the story hangs together well. Young Eric Wimp finds his life – and his body – transformed when strange radiation from a meteorite causes him to transform into a superhero every time he eats a banana. The catch being that his super-strong grown up self – Bananaman – remains just as foolish and naive as his teenage alter-ego – arguably even more so.

What’s presented here is a colourful cartoon caper full of song and dance that covers all the bases adequately. While crammed full with slapstick and off-the-wall antics, it’s a piece that somehow seems to lack some of the true anarchic spirit of its progenitor. The rather simplistic plot is saved, however, by some truly superb performances.

Related: God’s Own Country and Call Me By Your Name score BAFTA nominations

Absolutely stealing the show is Marc Pickering as Doctor Gloom – main baddie and chief source of all the big laughs. Pickering slithers and minces across the performance space with prowess and panache, carrying out his evil plans with such beguiling twinkle that we can’t help but root for him over the fruit-based protagonist. There’s also great support from fellow villains General Blight and Mad Magician – played by Carl Mullaney and Brian Gilligan. Amusing interactions between all three maniacal malcontents are the highlight of the show.

The music and lyrics are engaging – if a little vanilla. (Did you know that ‘Bananaman’ rhymes with ‘Evil Plan’…? It does – repeatedly.) There are also some superb voices on display. We were particularly taken by Emma Ralston as the plucky young schoolgirl reporter and Jodie Jacobs as sidekick Crow. The choreography is energetic but sometimes scrappy and unfocussed – particularly during combat scenes. And while there are some excellent solo vocals, group songs too often descent into unintelligible cacophony.

This is an exceptionally talented cast making the most of a limited script, although we’re not entirely sure who it’s aimed at. Viewed in the right spirit, there’s much to enjoy here and it’s worth seeing simply for the antics of Doctor Gloom.