The Secret River a compelling account of colonialism – review 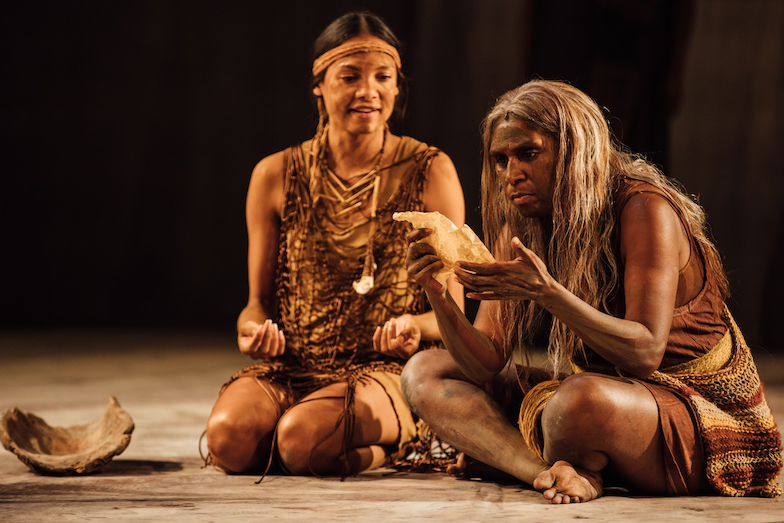 Following a run at the Edinburgh festival, the Sydney Theatre Company’s adaptation of Kate Grenville’s acclaimed novel has opened at the National Theatre, directed by Neil Armfield.

The London performances of this show follow the tragic news that one of its stars, Ningali Lawford-Wolf, passed away suddenly earlier this month during its run at the Edinburgh festival. With her family’s blessing, the National Theatre shows are going ahead in her memory; Pauline Whyman has stepped in to the part at short notice, reading in the role of narrator Dhirrumbin.

The story focuses on the lives on the Thornhill family. William, a petty thief who has recently earned his freedom in Sydney, persuades his wife Sal that instead of returning to England, the family should try and make a fresh start with a place of their own. They travel up river in search of somewhere to call home; upon discovering that the spot is already occupied by a family from the native Dharug tribe, they attempt to communicate, build a rapport and start to develop a fragile co-existence. Inevitably the tension and suspicion between the two families leads to some serious consequences.

This production gets a lot right. The setting feels great – the staging is vast but fairly simple, while the music, rooted firmly in Aboriginal tradition, gives a real sense of place. The quality of the acting is strong, with Nathaniel Dean as William Thornhill delivering a believable, multi-layered performance. Pauline Whyman also impresses in a role she stepped into mere days before press night.

The tone of the play may be serious, but a couple of more playful moments offer some much-needed lighthearted relief. While the men become increasingly violent, looking towards weapons to resolve their disagreements, the other family members indulge in more amicable activities. Seeing the children create a makeshift waterslide for their own entertainment is enjoyable, while witnessing the women of the Dharug tribe being introduced to sugar for the first time is a touching moment.

The Secret River isn’t always an easy watch. It weighs in at nearly three hours long, covers some serious issues and depicts some unpleasant, violent exchanges. Yet it provides a compelling account of colonialism – it tells an important story very effectively. It succeeds in not taking sides, highlighting the fears and difficulties faced by all parties; as such, we’d recommend a visit to the Olivier Theatre to see this important play.