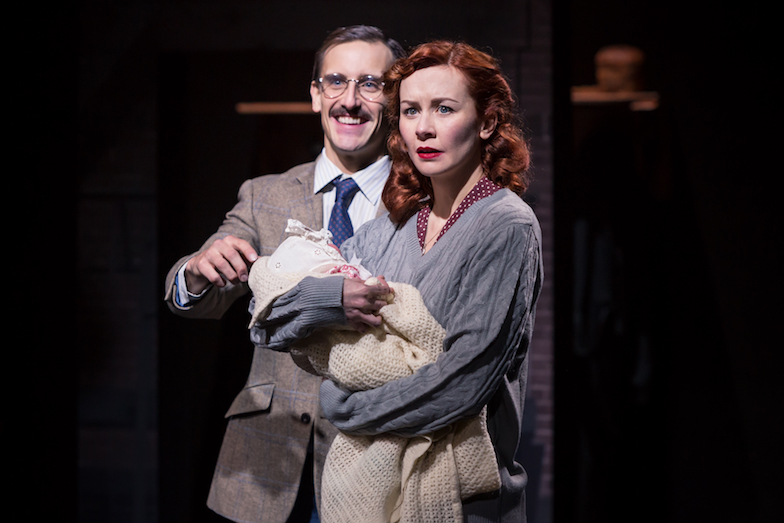 James Phillips’ award-winning play has opened at the Southwark Playhouse in its first London revival, directed by Joe Harmston.

It seems like the perfect moment to revisit 2005 play The Rubenstein Kiss, a spy drama inspired by Julius and Ethel Rosenberg. For those unfamiliar, the Rosenbergs were a New York-based Jewish couple who were executed by electric chair in 1953 for allegedly passing state secrets on to the Soviet Union. In the current climate of political uncertainty, with increasing paranoia about Russian interference, and American politicians putting forward alternative versions of the truth, it all feels very topical indeed.

The play fictionalises Julius and Ethel Rosenberg as Jakob and Esther Rubenstein, and tells their tale in parallel with that of their lawyer son Matthew and his love interest, history teacher Anna. Over the course of nearly three hours, the dual narratives explore whether the Rubensteins were falsely accused and wrongly convicted. It’s a slow burn, the first act taking time to set out the story and characters, while the second is punchier and with its fair share of action.

There were aspects of the performance we enjoyed. It tells an interesting tale and the acting is generally strong; we were particularly drawn to the younger couple. There were a handful of genuinely affecting moments, such as when Matthew recalls playing baseball with his social worker on the day his parents burned. The technical aspects of the play were interesting, too – the flickering lights and the static sounds foreboding of the electric chair which was to come.

It’s a play with some unanswered questions, however. We’re left to speculate on the motives of the FBI agent who interrogates the Rubensteins – we’re not given an insight into why he takes such an interest into the investigation. It’s not just the case that it’s simply unanswered; it all feels rather unclear. It also alludes to the motivations which compel ordinary citizens to work against the state, but doesn’t provide much in the way of insight or tease out the implications of doing so. The pacing of the show also feels a bit off – it’s a lengthy text and there are certainly some dips in the energy.

The Rubenstein Kiss is an interesting play. It’s a challenging and thought-provoking drama which touches on a fascinating and not altogether well known story, and it features some strong acting with a handful of effective moments. It does make some of its points rather more ambiguously than we’d have liked, and it overstays its welcome, but there’s still plenty here to enjoy.