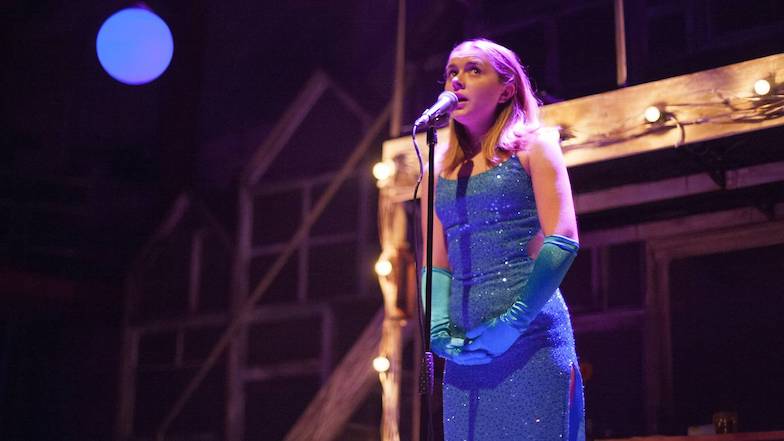 The Rise and Fall of Little Voice tells the tale of a timid but talented young girl, who has hidden herself away in her bedroom in a northern town. Unbeknown to her mother Mari – who, in stark contrast, lives a noisy life full of booze, men and greasy breakfasts – Little Voice has been listening to her deceased father’s records, perfecting the art of mimicking some of the 20th century’s greatest divas. When Mari brings local impresario Ray home after a night out, he is amazed to hear Little Voice singing in her room and forces her onto the stage where we witness a startling transformation.

It’s a poignant, pretty and ultimately uplifting tale. Much has been made of the casting of this particular staging which features, for the first time, a real-life mother and daughter relationship between Mari (Sally George) and Little Voice (Rafaella Hutchinson). The latter spends the majority of the first act so withdrawn that it’s difficult to ascertain whether this actually adds anything to the production, although the characters and dynamic develop during the second act, which leads to some interesting and moving moments.

There are some superb comic scenes in this production, too. There is a good deal of physical comedy throughout and we particularly enjoyed a hilariously choreographed rendition of The Jacksons’ I Want You Back which was performed with gusto by Mari and her friend Sadie (Jamie-Rose Monk). Both take it in turn to light up the stage with their comedic physicality and they share a handful of amusing synchronised moments.

We also particularly enjoyed the relationship between Little Voice and her one supporter, Billy (Linford Johnson), who meet by chance while Mari is having a telephone installed. Over the course of the play he encourages her to leave the mimicry behind and find her own voice. They share a supportive and understanding relationship filled with cute little moments.

This revival of The Rise and Fall of Little Voice is an impressive production. It has the right balance of light and shade, a healthy dose of comedy and plenty of poignant moments; it also features a cast of talented performers. We like the theatre space that the Park 200 affords and it’s a good fit for this staging. Highly recommended.

Gay Times gives The Rise and Fall of Little Voice – ★★★★☆