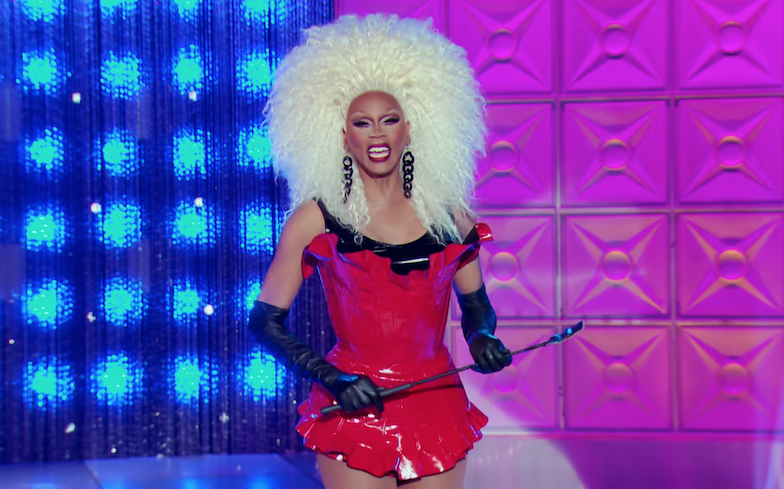 Madonna: The Unauthorised Rusical was a mothertucking SMASH.

This week, the queens got Into the Groove (1985) as they paid tribute to the legendary pop monarch and it was brilliant, incredible, amazing, show-stopping, spectacular, never the same, totally unique – wrong pop queen, but ya get it.

Following Aiden Zhane’s elimination at the hands of Brita, the nine remaining queens sashay back into the workroom and discuss the dramatic events of last week’s Drag Race Untucked; which saw Snatch Game winner Gigi Goode come into conflict with Heidi N Closet over her makeup and Widow Von’Du clash with Jackie Cox for not “preparing” for Snatch Game.

Heidi tells Gigi that she “lost so much respect” for her, whilst Widow says she will be satisfied if (and when) Jackie falls in the bottom. Jaida Essence Hall sums up the moment perfectly when she remarks: “That took a turn for the wicked.”

However, the drama takes a backseat when Ru reveals this week’s maxi-challenge: to follow in the footsteps of the Kardashians, Cher and D*nald Tr*mp in a killer musical and dance number for Madonna: The Unathorized Rusical, with the assistance of her number one superfan Michelle Visage and Sticky & Sweet Tour choreographer Jamal Sims.

Heidi says she respects the star for her fight against HIV/AIDS because her uncle, who sadly passed away when she was young, had been fighting the pandemic for years. “It was hard because he made me feel like I belong,” she admits.

She explains further in her confessional: “My uncle was the very first person I felt a really good connection with. He wasn’t well for a very long period of time. I would go and get his medicine and bring it to him so he’d be okay. One day, it was over.”

The lip syncs, the drama and the runways are to die for on this show, yes, but heartwarming moments such as this – and Gigi coming out as genderfluid, Monica Beverley Hillz coming out as trans, etc – is the reason why Drag Race has lasted for over 12 seasons. It’s why we keep coming back. Queer people connecting to queer people – can we get an amen?

The tears continue when Sherry asks Crystal if she has a positive relationship with her father, to which she reveals: “I have a really close relationship with my family, that’s part of the reason why I haven’t moved out of my small town. Him and my mom used to love going garage sale-ing and find me props. A few years ago, my father was diagnosed with Parkinson’s.”

Crystal tells her sisters that her father’s diagnosis is the reason why she’s been disconnected this season, admitting: “Every time I leave the house, I usually drive away crying. He has literally been my superhero, and taught me everything.”

Gigi then reminds viewers at home that, despite the conflict between the cast, they’ve “built a family and families fight and families get over it”. We hope this concludes the Gigi vs Heidi saga because we stan them both.. so much.

On the runway, Mama Ru sashays and shantays in her sickening latex, dominatrix-esque season 12 promo lewk and welcomes model Winnie Harlow and US politician and proud LGBTQ ally Alexandria Ocasio-Cortez to the main stage.

He then reveals the gag of the season with the runway theme: to pay homage to Seduction songstress Michelle Visage. Gag.

Now it’s time for Madge’s Rusical. Jan opens the show in a vintage, Holiday-inspired Madonna lewk and tears up the mothertucking stage with her powerhouse vocals and dance number, leaving RuPaul screaming (literally).

Jackie follows with her comedic take on Madonna’s Like a Virgin era, and is succeeded by Gigi in the star’s iconic Papa Don’t Preach ensemble. Despite struggling in both the vocal lesson and dance rehearsal, Gigi slays it harder than her predecessors and reminds us all as to why she’s the frontrunner for this crown. It was a PERFORMAHNCE HONEY!

In what will be remembered as one of the funniest scenes this season (or any season), Crystal makes her entrance below the camera – and in front of the panel – as she reneacts Madonna’s hippy-ish moves from the Ray of Light music video, before embracing her inner Roxxxy Andrews with some serious hairography.

Widow and Heidi finish off the Rusical as they channel Madonna’s later years; the former dons her cowboy-inspired aesthetic from Music while the latter proves her status as the dancing queen of season 12 as she harkens (?) back to the Confessions of Dance Floor era.

After the queens serve a variety of memorable Michelle looks, from her time on the Drag Race panel, her past music videos with Seduction, and when she was on the set for The Only Way is Essex, Ru hails Crystal, Gigi and Jan as the top three. She ultimately awards Gigi with her third win of the season, leaving the other queens – especially Jan – shaken (see below).

Brita, Heidi and Jackie are deemed the bottoms of the week. The latter avoids her first time lip-syncing, resulting in Heidi’s second and Brita’s third attempt at impressing the judges and advancing in the competition.

To the beat of Madonna’s 80s classic Burning Up, the queens deliver the best lip-sync of the season with splits, kicks, flips – you name it. In the end, Heidi overshadows Brita and the rest… is HERstory. Not only was this the best Rusical in Drag Race’s 11-year run, but we’ll even go as far to say that it was one of the best episodes, periodt.

Do you agree with our bold statement? We’re sure you’ll let us know in the comments…