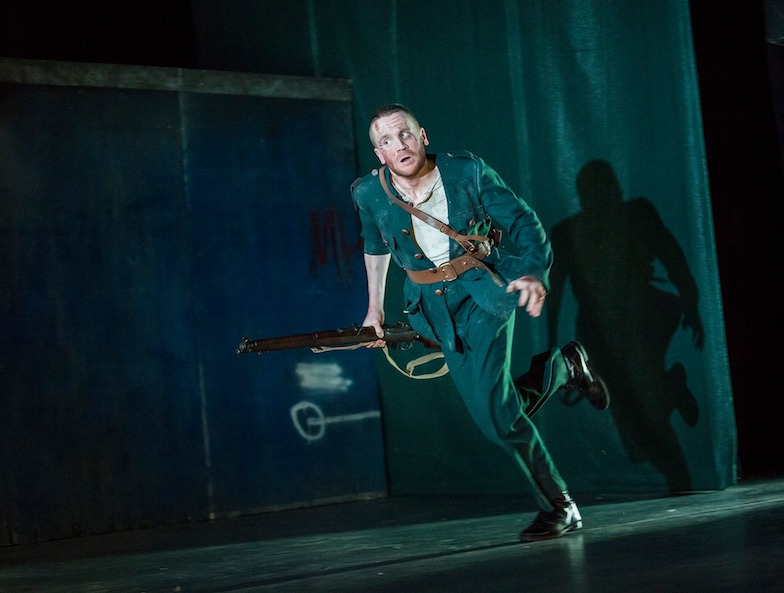 Sean O’Casey’s classic play, set in Dublin during the tumultuous Easter Rising, has been given a modern twist at Hammersmith’s Lyric Theatre.

The Plough and the Stars is certainly not a show for the faint-hearted. Set in Dublin during 1916, it tells the story of the ordinary lives of the residents of a tenement block being ripped apart by the idealism of the time, as revolution grips the city. It’s a noisy and violent play – expect plenty of fighting, guns being fired, blood being shed and a number of difficult-to-watch scenes.

Olivier-award winning director Sean Holmes breathes new life into O’Casey’s text – it’s an unusually modern staging. While much of the language remains traditional, as do some of the costumes, there are contemporary nods. News is consumed by television updates; a child is distracted by a Nintendo 3DS; bags of Monster Munch are consumed.

Jon Bausor’s set, too, is anything but conventional, the tenement block re-imagined as a bleak fortress of exposed metal and woodwork, with sparse furniture scattered across the stage. It all comes together to do a fair job of making the play feel more contemporary, although the blend of old and new doesn’t always convince.

Given the serious tone of the text, there are plenty of enjoyable, amusing moments. Niall Buggy, as Peter Flynn, has a wonderfully overblown sense of occasion which is very funny to watch – as are the various characters’ reactions to him. There’s an entertaining early romance scene between Jack Clitheroe (Ian Lloyd Anderson) and wife Nora (Kate Stanley Brennan) featuring the unexpected use of a sofa. Observing how the different characters respond to the opportunity to go shoplifting is also quite entertaining.

Unfortunately we felt it never quite came together as a cohesive whole. The mix of old and new sometimes worked, but other times jarred. The tone of the play would frequently jump back and forth between lighthearted and devastatingly serious – which, again, was effective at times but felt unnatural in places. We also struggled to wholly invest in some of the individual characters’ narratives – that’s not to say there weren’t any powerful scenes, but we felt we could have been more engaged.

This rendition of The Plough and the Stars has plenty to offer – it tells a powerful story, there are some effective scenes and numerous darkly comedic moments. We just felt it could have come together as a more convincing whole – it doesn’t really add up to more than the sum of its parts. Good, but not great.