The Phlebotomist an intelligent exploration of a dystopian future – review 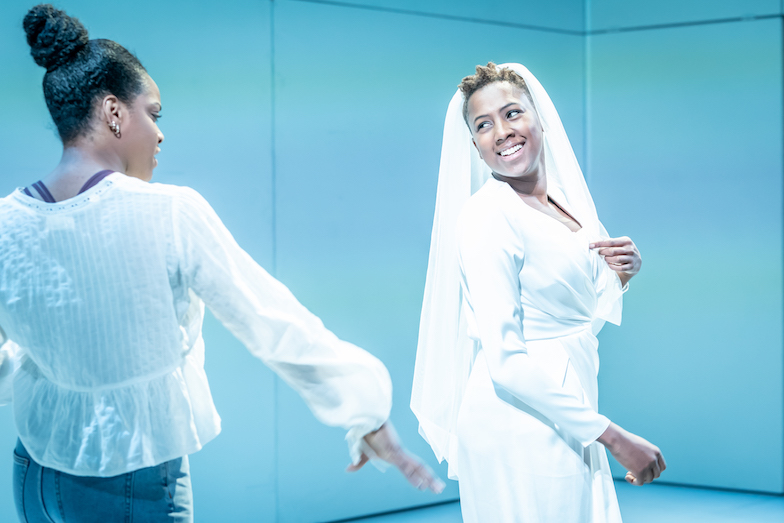 The Phlebotomist is a deliciously simple yet clever concept. Set in a completely believable near-future, it tells a Black Mirror-style story whereby people are rated according to their blood type. Their chances in life, love and almost everything else besides are determined by a blood test, after which they are assigned a score out of 10. This rating will then impact on all aspects of their lives, from who they will match with on dating profiles to which types of careers they can apply for.

It focuses on the story of Bea (Jade Anouka), the titular phlebotomist, who falls for Aaron (Rory Fleck Byrne) after a seemingly chance encounter on the ward. Bea is a solid 7.1 while Aaron, a trainee barrister, is an absolute catch at 8.9. The two bond over a mutual love of poetry and pineapple juice, but this is far from a straightforward romance.

The play throws up some interesting questions. When the blood tests are introduced, the population at large becomes obsessed with them – the country becomes increasingly rate-ist and those who discriminate based on a low rating are accused of rate-ism. A number of difficult concepts are presented, many in the form of adverts projected against the set – a particularly alarming one extolling the virtues of post-natal abortion for children with a disappointing rating.

Bea finds herself in a moral dilemma when her best friend Char (Kiza Deen) requests a test, as her score will be expected as part of a job application. Bea is aware of how hard her friend has studied at university to work towards this career, so when a predisposition to Huntington’s disease renders Char a 2.0, Bea feels obliged to help her by using a sample of someone else’s blood. She continues to abuse her position to exploit this emerging black market, helping others cheat the system in exchange for money.

It’s an impressive piece. The acting is strong throughout, particularly from the talented Jade Anouka who is impossible to dislike. The set is spot on, too – initially it seems symbolic of the clinical perfection that the ratings system encourages, but over the course of the play it falls apart as the culture built on the system gradually collapses. The concept may not be entirely original, but it’s an intelligently-written and elegantly executed text.

Overall we were hugely impressed with The Phlebotomist – there’s little here to dislike. There were occasions when we felt the tone was slightly off – there’s plenty of humour, and sometimes it’s a little too jolly given the challenging nature of some of the content. There were also a couple of ideas – allusions to water shortages, or fruit becoming an expensive luxury – which might have benefited from a little more fleshing out.

These are incredibly minor criticisms of what is otherwise a very strong debut play. Ella Road has created a future which is at once disturbingly different and yet instantly recognisable. Given society’s obsession with genetics, the introduction of a ratings system seems entirely plausible. The Phlebotomist is an intelligent exploration of a dystopian future – a wonderfully thought-provoking night at the theatre.