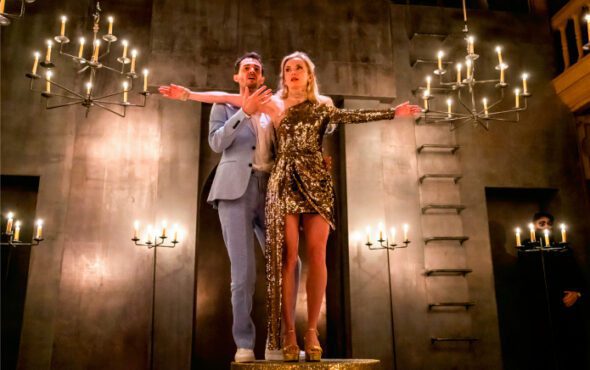 We’re big fans of the Sam Wanamaker Playhouse – it’s a gorgeous little space, nestled inside the Globe on London’s Southbank, and is entirely candlelit. Seeing a play here certainly is an experience – it really is like stepping back in time. The intimacy facilitated by the proximity of the actors to the audience really makes us feel like we’re all involved in some sort of communal, almost immersive event – we love spending a couple of hours in this gem of a venue.

The Merchant of Venice is one of Shakespeare’s most problematic plays – its story centres around themes of antisemitism and racism, and the text contains an array of reductive Jewish stereotypes. Director Abigail Graham breathes new life into this updated and trimmed rendition of the play, making it clear from the off that this is a story of a Jewish man who is the victim of a hate campaign by an entitled, powerful, antisemitic elite.

Adrian Schiller is utterly superb as Shylock, or ‘the Jew’ as he is referred to by the vulgar city boys who control proceedings. We were immediately on his side and this production makes abundantly clear who the real victim is here – his mistreatment throughout is so unjust that his eventual insistence on having his pound of flesh seems entirely reasonable. His gentle demeanour really sets him apart from the other men in the play, who enjoy obnoxiously-raucous, booze-filled singalongs to ‘I Gotta Feeling’.

Despite the traditional setting this is far from a conventional staging – indeed there are moments which are so off the wall they almost feel like a different play, which initially jar but we eventually warmed to. Of particular note is a gameshow-style segment which sees Portia (Sophie Melville) search for a suitor: it’s glitzy, silly, utterly bizarre – but in a rather entertaining way – and has an absolutely spot-on soundtrack.

We really rated this new version of The Merchant of Venice. The subject matter is problematic but this is not shied away from – the difficult themes are tackled head on in a thoughtful retelling, framing proceedings in a sensitive new light. A very smart production indeed.