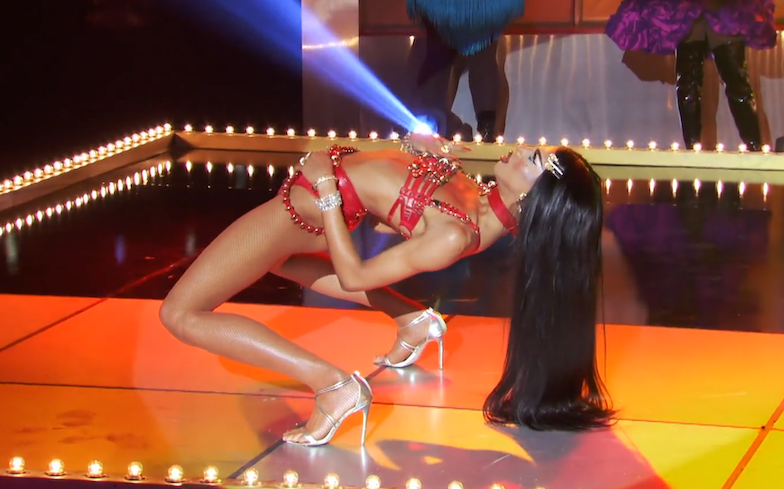 LORDT we were not ready for this week’s episode of All Stars. The ruveals! The acrobatics! The flexibility! Like we said in our headline, this will enter the HERstory books heeeenny.

In the latest instalment of Drag Race, the eliminated queens – Latrice Royale, Gia Gunn, Farrah Moan and Jasmine Masters – ru-turned for their ru-venge, which didn’t come as much of a shock to fans who had watched the previous two seasons of All Stars. However, this time around, all four queens had the opportunity to come back in the competition, whereas on All Stars 2 and 3, Mama Ru only gave one contestant the chance to return. Well, Alyssa and Tatianna both came back, but Shut Up and Drive, know what I mean?

“For the first time in Drag Race HERstory, we’re having a Lip Sync LaLaPaRuZa,” RuPaul told the queens. “In reverse elimination order, each of you gets to choose which current All Star you think you can take down in a lip sync for your life. If the eliminated queen wins, she re-enters the competition and sends the current All Star home.” Understandably, all the queens were gagged to the high heavens. Because Manila Luzon and Monét X Change won last week’s challenge, they were granted immunity, which – fun fact! – hasn’t been granted to any contestant since Alyssa Edwards in season five. So, all episode, they pretty much did nothing, except gag us on the runway with two of their fiercest lewks ever. Manila provided us with another themed costume, and Monét undeniably looked the most beautiful she’s ever been. Facts are facts Amurica!

First up to earn her place back in the competition was the first eliminated queen, Jasmine Masters, and because she had to choose last, she was paired with lip sync assassin Trinity the Tuck. The queens battled it out to Ru’s classic sex-jam Peanut Butter, but Jasmine was no match for Trinity, and was eventually told to sashay away. It was a faaabulous performance, but out of the four overall lip syncs, this was probably the only one with an obvious winner.

Farrah Moan, who’s not as renowned as some of the other queens for her lip sync abilities, then provided us with a sickening number to Kitty Girl against best frenemy Valentina. The two have had a rocky history in the past, as you remember with the gag-worthy season nine reunion, and because Valentina knocked her out of the competition four weeks prior, so it was a gag. Unfortunately for Farrah, Valentina turned it out, and again, she got the chop.

Next up was Gia Gunn and Naomi Smalls, and honestly, this should’ve been a double shantay. Gia, who currently resides in the Haus of Edwards, came prepared with a ruveal and left us positively slain with choreography, hairography etc. She used every trick in the book, just like we’re doing in this article with our Drag Race terminology. But we can see why she lost, because Naomi gooped us with something we’ve never seen on the main stage before: flexibility. Yas, other queens such as Katya have flaunted their “hot and flexible bodies” (thanks Yuhua for that quote) but as you can see from our header image, Naomi came to play (that). Gia was then told to sashay away, but she did so with pride, because that performance was killer.

The final showdown… ooh child. Latrice – who had the honour of choosing first – picked Monique Heart’s lipstick, which wasn’t a shock to anyone because a) she eliminated her, and b) the first few minutes of the episode. The queens, who are both known to be the Beatrix Kiddo of lip sync assassins, tackled RuPaul’s best and most iconic song (after Supermodel), Sissy That Walk. We’re going to need to update our lip sync ranking because this was one of the most sickening showdowns in Drag Race HERstory. It had everything you needed from a lip sync performance: wig reveals, splits, spinning… drama! Their charisma, uniqueness, nerve, talent, and ability to attach two wigs to their heads resulted in a double shantay, deservedly.

So, no one went home (except Gia, Farrah and Jasmine of course), which means we have a top seven, again. Next week, the queens are tasked with designing and hosting their own VIP Club nights, with extra special guest stars Susanna Bartsch and Rita Ora. Oh and by the way, All Stars rules are no longer suspended…