The Lion, the Witch and the Wardrobe is a magical revival of a timeless tale – review 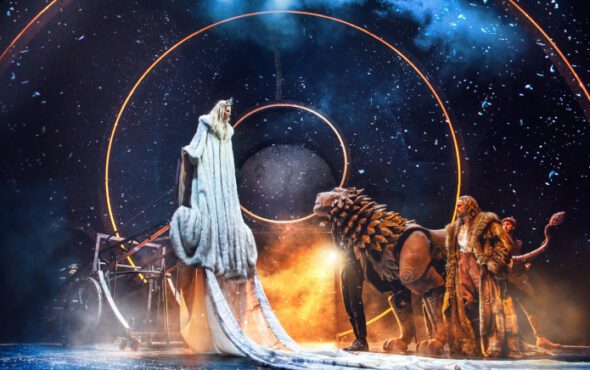 It’s difficult to go wrong with CS Lewis’ timeless tale – it’s a story that many of us here in the UK have grown up with and hold fond memories of. This revival, from director Michael Fentiman – based on the 2017 production by Sally Cookson – is absolutely magical; full of wonder and spectacle, it looks just like we imagined in our minds when we read the original novel.

There’s a lot of music in this production, although it remains very much a ‘play with songs’ as opposed to a musical. It opens with a moving rendition of ‘We’ll Meet Again’, setting the wartime scene as the Pevensie siblings are evacuated from London to Inverness during the Blitz. They are housed with Professor Kirk and his entertaining cat Schrödinger (played with some delightful puppetry) alongside the formidable Mrs Macready.

The acting performances are impressive – the four siblings, Peter (Ammar Duffus), Lucy (Delainey Hayles), Susan (Robyn Sinclair) and Edmund (Shaka Kalokoh) are universally strong and have a palpable chemistry. Samantha Womack is terrific as the White Witch – hers is a delightfully camp performance and yet never strays into pantomime territory; there’s definitely an edge and a real sense of danger when she takes to the stage. Aslan (Chris Jared) is an epic creation and the movement of the puppetry is quite a feast for the eyes.

We were completely taken with the staging, too – it’s hard to believe this is a touring production, as it’s a perfect fit for the Gillian Lynne Theatre. There’s a real sense of scale – when our protagonists embark on a journey, it actually looks and feels like they’re going somewhere distant. Some of the visual elements – the transformation of the White Witch or the first appearance of Aslan – really are a joy to behold.

The Lion, the Witch and the Wardrobe is a treat for the whole family. Unsurprisingly, on press night there were a lot of children in the audience, and while they certainly appeared to enjoy the show it’s certainly not just for them. It’s perfectly paced and the stakes genuinely feel high – a happy ending never feels in the bag and there’s a genuine sense of peril throughout. It’s an evening full of magic and wonder, with some delightful visual trickery thrown in – what’s not to love?

GAY TIMES gives The Lion, the Witch and the Wardrobe – 4/5