The Lieutenant of Inishmore a violent, shocking dark comedy – review 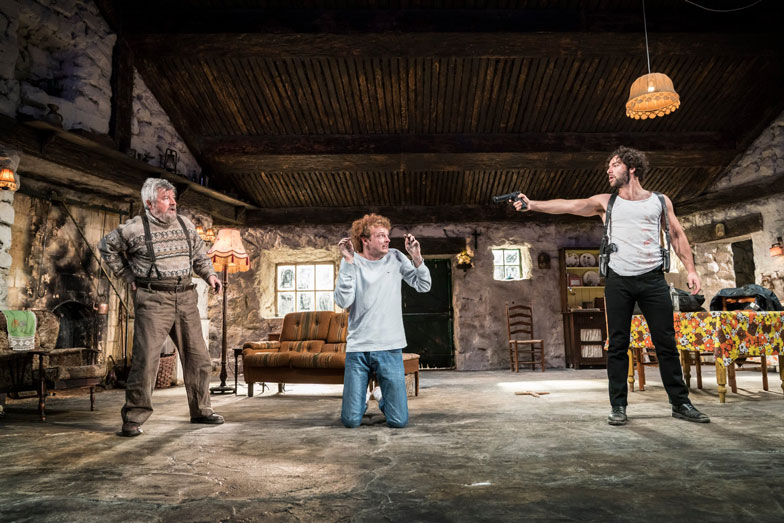 Aidan Turner stars in this new staging of Martin McDonagh’s play at the Noel Coward Theatre.

The Lieutenant of Inishmore is not the most straightforward concept for a comedy. It tells the story of Mad Padraic – deemed too violent to join the IRA, he’s a member of splinter group the Irish National Liberation Army. When his father and hapless local boy Davey discover that Padraic’s beloved pet cat Wee Thomas is dead, they attempt to coat a local ginger cat in shoe polish in the hope that he won’t notice. Unsurprisingly, this venture isn’t entirely successful, leading to some extremely violent consequences.

It’s comedy at its darkest, but also highly entertaining. There’s a lot of gore, although those of a squeamish disposition will be relieved to know that much of the violence is either implied or happens off-stage – but there are still a handful of truly shocking scenes. The tone becomes much darker towards the play’s conclusion, which had the effect of making us feel rather uncomfortable laughing at the punchlines in light of what was unfolding on stage – but we were still thoroughly entertained.

Related: ENO’s The Turn of the Screw a dark, haunting production – review

In terms of the humour, the majority of the jokes and plot twists can easily be foreseen, but that doesn’t make them any less entertaining. When Davey started to prepare a cross for Wee Thomas’ grave, it was immediately obvious that Padraic would discover it – but we were still amused by how he found it and his reaction to finding it. Even though a lot of the jokes are predictable, there was one particularly brilliant and unexpected moment towards the end which had the entire audience laughing.

While there is much to recommend, we felt there were a couple of shortcomings. There is certainly a pacing issue – the second half is much slicker and funnier than the first. And while Aidan Turner shines throughout, we couldn’t say the same for the supporting cast. Each character had their moment – especially Padraic’s father, who really came into his own after the interval – but none seemed to consistently impress.

The Lieutenant of Inishmore is an intriguing and amusing play. It’s a violent, shocking dark comedy, full of entertaining twists and turns and featuring a superb performance from Aidan Turner in the titular role. It has a couple of issues, and cat lovers and those of a squeamish disposition may find a few scenes uncomfortable, but we’re still happy to recommend it – well worth checking out.