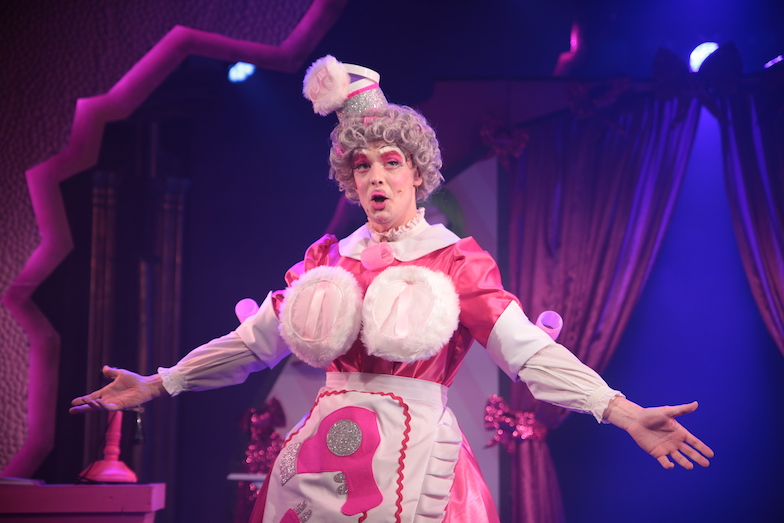 Annual festive shows at the UK’s only LGBTQ dedicated theatre space have become hotly anticipated affairs, and this is the first one to be mounted at their shiny new venue on the Albert Embankment in Vauxhall.

Seeing the creative team let loose on this larger canvas is an absolute joy. Their unbridled creativity has resulted in one of the finest and most thoroughly entertaining Christmas shows that you’re ever likely to witness.

In the generic northern town of Rugburn, respected dame Mother Goose runs a hairdressing salon with her handsome gay son Tommy. Their lives are turned upside down by the arrival of a goose that lays golden eggs. How will this newfound wealth affect Tommy’s relationship with Chester, the closeted son of the local plain speaking captain of industry? How will the town cope with its first ever Pride festival? And what will be the outcome of a wager on Mother Goose’s good nature made between the lesbian witch Mephista and the gay fairy Dandelion?

Authors Jon Bradfield and Martin Hooper have delivered another triumph. Everything that one would expect from a traditional panto is present and correct – all served up with their unique brand of darkly comical filth. Playful queer archetypes give us characters that we instantly fall in love with, and a skilful blend of slapstick and sophisticated innuendo ensures that the laughs come thick and fast.

The sing-along – an LGBTQI alphabet song, complete with hand gestures is inspired, and a visual gag involving an undressing hunk and a translucent curtain expertly treads the fine line between comedy and titillation. Bradfield and Hooper are masters of their craft, utilising the quirks of the medium they have weaved a deceptively complex caper. Beneath all the fun and frolics lies a perceptive portrait of gay culture.

A uniformly excellent cast is led by Matthew Baldwin as Mother Goose – giving a masterclass in dry wit and underplayed comic genius. Baldwin steals the show with sardonic sass and piquant put-downs. Liam Woodlands-Mooney as Tommy is everything that one could hope for from a principle boy; devastatingly good-looking, winsome, and seductive and a great dancer. His change of character when put under a spell is convincingly portrayed, bbut to give away any more here would spoil the surprise.

Special mention goes to Laura Blair as the magic goose, for being consistently hilarious even when just in the background of scenes. And there’s fabulously entertaining support from Ellen Butler as the lesbian Mayor of Rugburn, and Christopher Lane as the father who’s blind to his son’s homosexuality, despite the rainbow outfits and sparkly angel wings.

From the glittering solid-gold loft conversion, to the icy wilderness of ‘Gooseland’ – the sets by David Shields, and lighting by Jamie Platt, combine to create something truly magical – a sense of depth and scale is achieved that raises this production head and shoulders about any comparable efforts. Costumes by Robert Draper and Sandy Lloyd ensure that everyone sparkles.

If you only see one queer adult panto this season, make sure it’s this one. Tailor-made for LGBTQ audiences, Mother Goose Cracks One Out is an eggs-tremely egg-cellent way to usher in the festive season. Don’t miss it!