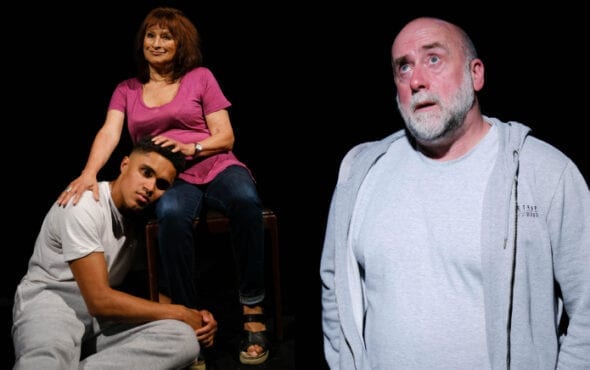 The new show, written and directed by Eugene O’Hare, has opened at the Omnibus Theatre in Clapham.

We’ve covered a couple of Eugene O’Hare’s plays before – The Weatherman and Sydney and the Old Girl – both of which were dark comedies wrestling with tricky subject matter. The Human Connection is not dissimilar in tone, though the format is unusual. It is in fact two short plays: a monologue entitled Larry Devlin Wants to Talk to You About Something That Happened, and then after the interval, a two-hander called Child 786.

The former stars Stephen Kennedy as Larry, as he shares his memory of the time he hit his son – it’s a difficult watch that explores the ongoing guilt and grief at his actions. This is a short and snappy production, coming in at just shy of 30 minutes, and it makes a real impact. Kennedy is strong in the role, delivering an intense, powerful and moving performance. The ending is unexpected and a little surreal – we’re not convinced it really adds much to the show, but the preceding monologue is genuinely very good.

After the interval we are introduced to mother and son Hilary (Ishia Bennison) and Lennox (Joshua Williams). It’s a very different play indeed, focusing on the impact of the pandemic and more specifically the lockdown and how it has affected younger people. Lennox is a university student who’s moved back in with his mum and over the course of an hour we see how they’ve both been navigating their way through the crisis.

In contrast to the first short play, which focused very specifically on one event, Child 786 attempts to bite off rather more than it can chew in the limited time frame. As well as their contrasting opinions on the pandemic and lockdown situation, a whole host of conspiracy theories and broad questions about British politics in general are considered. Thrown into the equation is a subplot about a vaccine trial that Lennox may or may not have taken part in as a child; his absent father is also discussed by both characters.

There’s rather too much going on and while there are some astute observations, and a handful of surprisingly amusing punchlines, it’s not nearly as tight or focused as the monologue which precedes it. It attempts an exploration of the impact of lockdown on mental health but there’s just too much else going on and too little time for this to be anything more than a very surface-level addition.

What’s we’re left with is very much a play of two halves – Larry Devlin Wants to Talk to You About Something That Happened is an impressive consideration of the ongoing impact of one specific event, while Child 786 is full of good ideas which don’t really gel. It’s not a bad show at all, but we felt the potential here hadn’t been fully realised – with a bit of fine tuning this could be so much better.