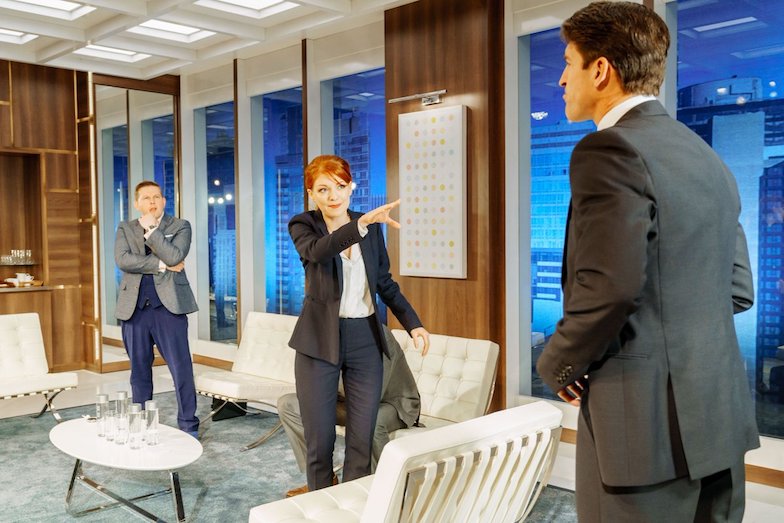 Set in the office of a New York City Fortune 500 company, The Gronholm Method tells the story of four characters competing for a high-powered job in a group interview scenario. It exposes the depths people will go to in order to get what they want, exploring the human capacity to manipulate and lie to get ahead in life.

Over the course of 90 minutes the four are set a variety of challenges – these begin playfully enough, but soon take a sinister turn. With each task that passes, the characters are forced to expose potentially reputation-damaging truths about themselves while their competitors analyse and critique their stories, trying to figure if they are being told the truth and if so, whether they should remain in the process.

It’s an intelligent idea for a play and one that’s full of twists and turns. As we were never given any concrete truths, we were continually trying to second guess what would come next or how a particular episode might end, and the outcome was frequently unexpected. There was a particularly effective scene towards the play’s conclusion where the final two were assigned tasks, which they then had to try and persuade their competitor to complete without their knowledge – we kept trying to figure what the task might be or what their actions might be leading up to.

Alongside being a smart play it’s also pretty humorous. Not all the jokes landed and some were a bit groan-inducing but there were plenty of laugh-out-lough moments. We also appreciated some of the subtler humour – the opening scene where each new candidate unwittingly steals the previous candidate’s chair is amusing, and there are some wonderfully devastating lines delivered with a smile which were particularly entertaining.

The acting is solid throughout, too. We bought into each of the characters completely – particularly Frank (Jonathan Cake) who was convincingly unpleasant, and the ruthless Melanie (Laura Pitt-Pulford) who, with steely determination, chose to remain in the process in spite of being notified of a close family bereavement while in the meeting room. The play is quite episodic, with most scenes giving one actor the opportunity to tell his or her story – while each was convincing, we also enjoyed observing the others’ reactions to their tales.

In terms of production, it had a simple but effective set. It very much looked like a meeting room of a top firm and there were a few neat production techniques used sparingly throughout. We were particularly impressed by the subtlety with which day turned to night over the course of the play. There was also a scene delivered in the dark after the office supposedly closed and the lights were turned off, which worked well and was quite amusing.

The Gronholm Method is certainly a unique experience and a clever idea for a play. We’re aware it’s potentially of niche appeal but it does what it sets out to do very well indeed – it’s a smart, slick production with a healthy dose of humour and solid acting throughout. Well worth investigating.