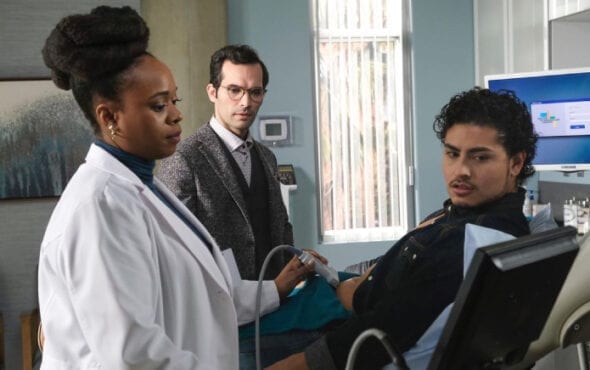 The Good Doctor has received acclaim for its depiction of transgender parenthood.

In the latest episode of the medical drama, which stars Freddie Highmore as an autistic savant surgical resident, Rio Gutierrez (Emmett Preciado) – a transgender man – discovers he is pregnant while seeking treatment for a brain tumour.

Highmore’s character, Shaun Murphy, is left baffled, and asks Rio’s fiancé Eliz (Jonathan Sousa) if he considers himself gay or not, because he has “vaginal intercourse” before he’s shut down by his fellow doctors.

He later says: “He is very confusing to me, too. Rio has worked so hard – he had a bilateral subcutaneous mastectomy and takes hormone replacement therapy, but now he is choosing the most female act [giving birth].”

Eliz hits back at Murphy: “It’s not female if Rio’s doing it.”

The episode also tackled the issue of being misgendered in hospitality, as Rio’s hospital records state him as female, same-sex parenthood and the importance of asking people for their correct pronouns.

In an interview with Forbes, Preciado said he thought the script would need be amended to better represent the trans experience, but was pleasantly surprised at how it reflected his own story as a transgender man.

“I thought I was going to need to do that,” Preciado told the publication. “But I really thought that they had had a trans person write this whole script, because it was something I could relate to. All of it was so accurate.”

The star said he resonated with the scene in which Murphy inappropriately asks the couple about their sexuality and identity, because he’s dealt with “hateful comments for years” of people telling him he’s “not really a man, still a girl”.

“Those were the words that I almost want to use when I talk to all my friends or family members,” he said. “I understand that I was born in a female body, but my brain and my soul is masculine; It is male. I am.

“I do not identify with the body that I was born with. What is it to be feminine or masculine? Why does it have to be so that it’s all defined, you know?”

Preciado continued to explain: “I loved how it was written, because it shows that just because this person is deciding to carry a baby, because they can, because their body was built for that, why does that have to be a feminine thing? Why can’t it also be a masculine thing or why does it have to be either or?”

The rising actor and singer can next be seen in Good Trouble as a “young, book-smart lawyer”. He told Forbes that’s also written a screenplay because “there are stories that just aren’t being told.”

“I really want to get those out,” he added. “But for right now, I do just want to continue to play characters and to help tell the story, whether that is TV or film, whatever story needs to be told.”

The Good Doctor received praise from viewers for its authentic representation of the transgender community. Check out some of the responses from Twitter below.

"i've changed my mind. i want to keep the baby" AAAAAHHHHHHHHHH i am so happy that a trans pregnancy conversation is happening on mainstream tv

This Good Doctor episode with the pregnant trans man and racial bias is GOOD! The writers snapped with that one!

a gay trans man on the good doctor? i know it's not a perfect show but holy shit does it feel good to be represented on prime-time television like this

what a good day at work while watching stuff.