The Girl Who Fell a poignant and amusing dark comedy – review 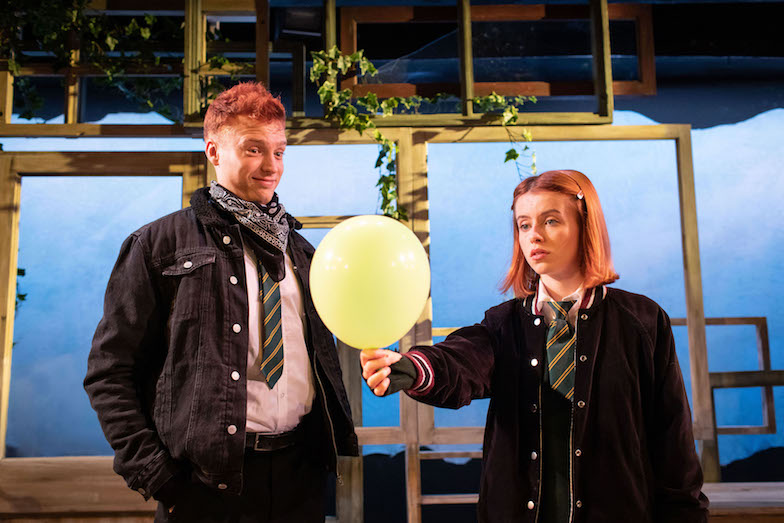 The subject matter of The Girl Who Fell may not lend itself naturally to comedy – it becomes apparent very quickly during the opening exchange that someone has recently died – yet it manages to be one of the quirkiest, warmest and indeed funniest plays we’ve seen in quite some time. It focuses on those left behind following teenager Sam’s suicide, including her boyfriend, her best friend, and her mother.

It’s a cleverly constructed text. Over the course of 100 minutes we gradually learn more about each character and their back stories, piecing together a puzzle that brings together the lives of all the play’s characters – even one who initially seems completely separate from Sam’s story – so that they can all share a stage during her final send off. It has a quirky and unpredictable sense of humour – we’re still not sure why her boyfriend slicing her posthumous 16th birthday cake was so funny, but it had the whole audience laughing.

We’ve not seen a story quite like this before. The premise is that Sam has recently died by suicide – the mother is the chief suspect, having filmed a ‘shaming’ video of Sam being punished for posting explicit pictures of herself online. However, the various characters’ grieving processes quickly give way to questioning and soul searching. Is Thea really to blame? How good a friend had Billie really been in the run up to her death? How was Sam’s relationship with boyfriend Lenny? And is there more to seemingly friendly stranger Gil than meets the eye?

It’s all brought to life by a talented cast. We really enjoyed the playful dynamic between twins Billie (Rosie Day) and Lenny (Will Fletcher) – their sibling rivalry was amusing and at times really quite endearing. Mother Thea (Claire Goose) seemed to have the most interesting and varied role – a chaplain having a crisis of faith, she delivered a nuanced performance with a refreshing dose of humour. Navin Chowdhry was also strong as disgraced doctor Gil, succeeding in quite a tricky part with a complex history.

It does have some minor shortcomings – we felt there were a couple of small plot holes, or twists that didn’t quite seem believable. It takes a couple of scenes to find its rhythm, and we also felt it needed some sort of climax moment – the whole play feels like it’s building towards something that never quite arrives. But none of this detracts from The Girl Who Fell being a poignant and amusing dark comedy, and one of the most refreshingly original pieces of theatre we’ve seen in quite some time.