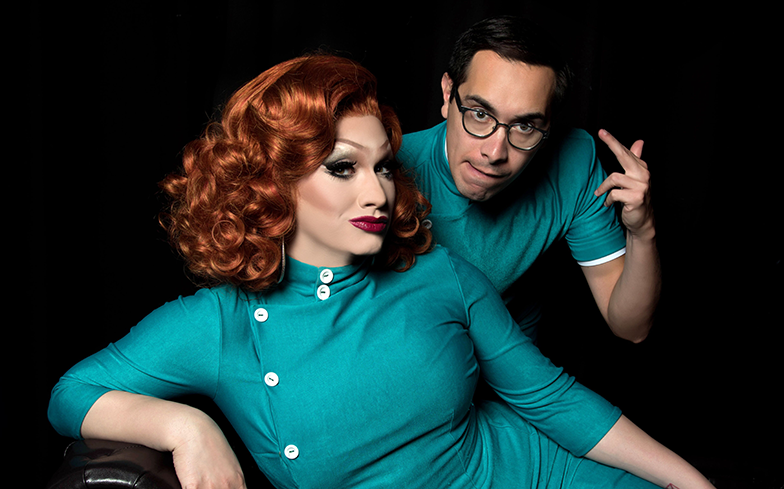 FIVE, FIVE, FIVE STARS ACROSS THE BOARD.

We never thought we’d see Jinkx Monsoon – Seattle’s premier, Jewish, narcoleptic, drag queen – wield a knife, down vodka and spit on a crowd of people with zero remorse, but here we are. The Drag Race season five champion, singer and comedian is once again touring the UK with her widely-acclaimed production, The Ginger Snapped, which she co-wrote and co-created with long-time collaborator Richard Andrieseen, aka Major Scales.

Her comedy partner, dressed as a paramedic, opens the show and immediately warns the audience of Jinkx’s volatile temperament. Major Scales does a fantastic job of warming the audience and creating an atmosphere while we wait. After a few minutes, Jinkx sashays onto the stage, and honey, she is pissed and she isn’t having it, at all. It soon becomes clear that this isn’t the same queen who once uttered the iconic phrase “water off a duck’s back”. Instead, we’re treated to the Jinkx who once said – beautifully, we should add – “Michelle Visage is so full of semen, period” combined with Jennifer Saunders’ portrayal of Eddie Monsoon in Absolutely Fabulous. (Major Scales is the equivalent of Saffy in this, not Patsy, btw.)

Over the course of the show, Jinkx confides in Major Scales about all her insecurities; that she’s worried her best years are behind her etc. To avoid a mental breakdown of majah proportions, he attempts to act as both a pianist and therapist, which she responds to with reluctance, opting instead to glug on some more vodka and xanax, which ends up making its way onto the audience. (Take a raincoat! Unless you don’t mind wearing the saliva of Drag Race royalty.) There’s playful jabs thrown in towards fellow Drag Racers such as Bianca Del Rio and Trixie Mattel, stunning musical numbers taken from her album of the same name, as well as commentary on Brexit and D*nald Tr*mp’s anti-LGBTQ policies.

The general consensus among Drag Race fans is that Jinkx is one of the most talened queens to come out of the Emmy Award winning series. And with this show, she more than proves it. Hell, we’re not even gonna limit it to just drag or Drag Race. Jinkx is one of the most talented performers in the entertaintment industry, period. Try and find someone else who can do what this motherfucking queen can do. Writing? Check. Vocals? Check. Comedy? Check. Charisma, uniqueness, nerve, talent and synergy? CHECK.

You can purchase tickets for The Ginger Snapped – which runs until 4 June here.