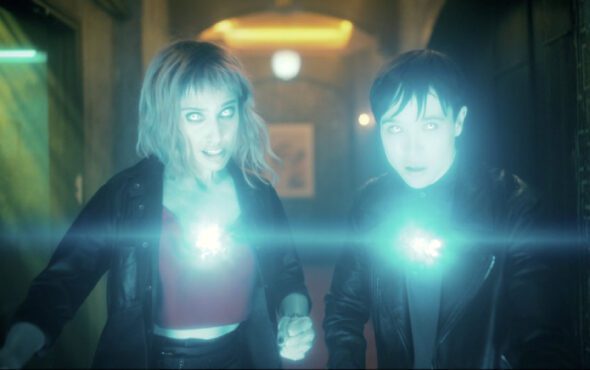 Hold onto your hats, queers, as the new trailer for The Umbrella Academy season three has us in a spin.

Season two left us on a major cliffhanger as the superpowered Hargreeves family were transported from the 1960s to an alternate 2019 with new siblings, superpowers and a whole new Academy.

With twists and turns coming from every dimension possible, we’re in for a ride.

So, what can we expect from season three? (Spoilers ahead, of course!)

Now in a parallel universe, where the Hargreeves’ were never adopted by billionaire Reginald Hargreeves, the siblings we know are forced to fight their alternate selves, otherwise known as the students of the ‘Sparrow Academy’.

The trailer also reveals some highly-anticipated character returns. Ben, the only sibling to die in the original timeline, is now clad with surreal powers and strength and alive in this new dimension.

Yet the biggest plot twist is the reappearance of Pogo, the fatherly chimp who cared for the Hargreeves siblings but fell to a tragic fate in the finale of season one.

In this new dimension, long gone are Pogo’s monocle and walking stick, but instead we find the beloved character in a tattoo parlour with a cigarette in his mouth.

This season also sees the debut of Elliot Page’s Viktor Hargreeves. First seen in an image shared by Page and Netflix earlier this year, Page’s character will mirror his own life experiences by coming out as a trans.

“Meet Viktor Hargreeves,” the actor wrote on social media alongside an image of his character on 29 March.

Page came out as trans and non-binary in December 2020 and has since used his platform to advocate for LGBTQ+ rights.

It was initially reported that his character would not be rewritten as trans, though Page’s posts confirm that this is not the case.

Catch the new series of Umbrella Academy streaming on Netflix from 22 June.