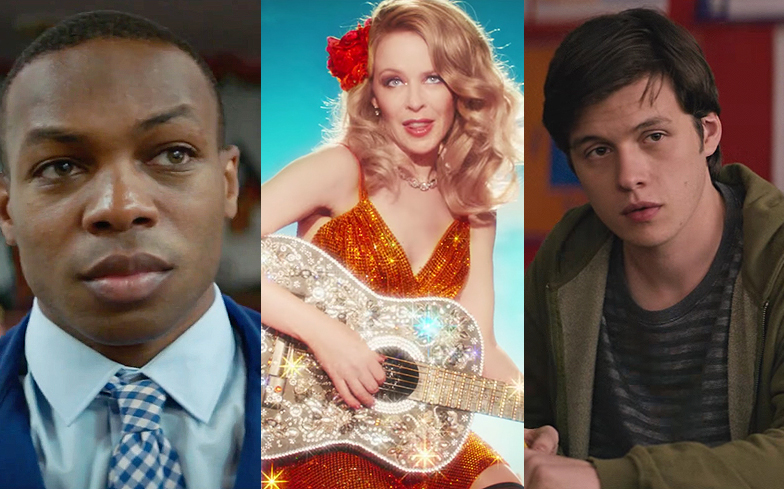 With the release of coming out movie Love, Simon, the critically-lauded 120 BPM (Beats Per Minute), a new Kylie Minogue album, and a collection of Elton John classic reworked, we hereby declare today Gaypril 6th!

What a time to be alive.

If you haven’t heard about Love, Simon yet, where have you been? Touted as the first mainstream romantic comedy produced by a major movie studio to feature a gay lead character, its arrival in UK cinemas today is long overdue. Gay Times gave the flick a solid five-star review, saying: “Whilst no film can be a totem for all LGBTQ people, we have no doubt just how important this film will be for many queer youth today.” Basically, go see it and take all your friends!

Fourteen albums into her illustrious career, Kylie Minogue has finally gone country. Sorta. The pop princess weaves plenty of Nashville inspiration into the pop bops of her new collection Golden, pairing wistful stories with chewy melodies and a dash of infectious hoo-hah. Aside from singles Dancing and Stop Me From Falling, notable tracks include A Lifetime to Repair and Live a Little. All you have to do is grab your stetson and enjoy.

If one major gay movie wasn’t enough, this week we are treated to two. French film 120 BPM (Beats Per Minute) follows members of ACT UP (AIDS Coalition to Unleash Power) in Paris in the early 90s as they fight to raise awareness of the HIV/AIDS epidemic, and trying to slash through the stigma that surrounded it. Gay Times gave the movie four stars, saying: “120 Beats Per Minute is an unflinching, often exhilarating and ultimately moving portrayal of a community galvanising during a crisis.”

Todrick Hall: Behind the Curtain

In this acclaimed documentary – now streaming on Netflix – fans will witness the story of how this small-town Texas boy worked his ass off to big-time show business, in an “inspiring documentary of grit, perseverance and the redemptive power of art.” We all know Todrick Hall from his inventive YouTube videos, fierce choreography, and Drag Race judging stints, but this is what happens behind the scenes as he embarks on an ambitious tour. Bob the Drag Queen, Nicole Scherzinger, and Jordin Sparks are just a few of the big names who make special appearances.

To celebrate the magnificence of one of music’s most successful pairing, Elton John and Bernie Taupin’s classic hits have been – you guessed it – revamped by today’s biggest artists. Q-Tip and Demi Lovato have reworked Don’t Go Breaking My Heart to spectacular effect, while Lady Gaga, Sam Smith, Miley Cyrus, Mary J Blige, Pink, Florence + The Machine, The Killers, Coldplay and Ed Sheeran, among many more have also contributed. It’s an all-star collection for the ages.

What do you get if you cross the UK’s biggest superstar DJ with one of the biggest female singers slaying the game today? An absolute banger ready for the summer. Calvin Harris and Dua Lipa have joined forces for stomping track One Kiss, which sounds like it has been lifted from one of the Ibiza Anthems compilation albums in the late 90s. That’s a very good thing, by the way.