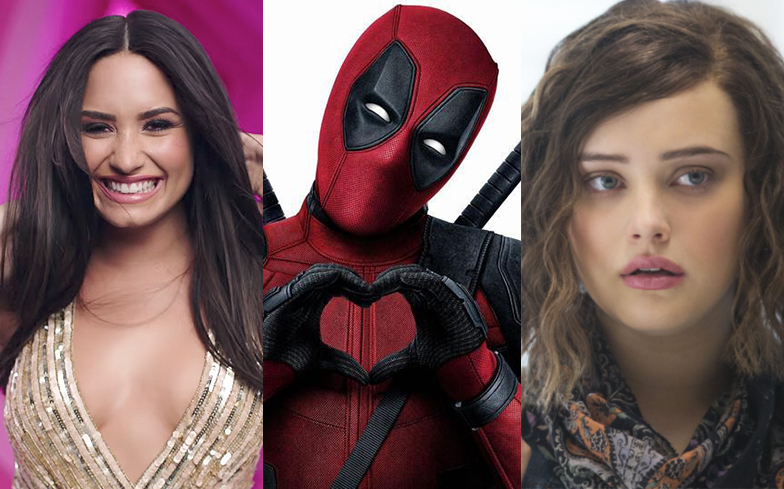 Pansexual superhero Deadpool is back for more kick-ass frolics in his second blockbuster instalment, Clean Bandit and Demi Lovato have teamed up for what is essentially going to be the song of the summer, and the second season of 13 Reasons Why is now available for you to binge all weekend.

The “merc-with-a-mouth” is back! Deadpool 2, the sequel to the acclaimed 2016 blockbuster, has received acclaim from critics for its performances, dynamic action, and twisted-as-f**k humour. It’s bigger, it’s bolder, and it’s bloodier.

In the hilarious, action-packed follow-up, Deadpool faces off against Josh Brolin’s time-travelling villain, Cable, who has taken an inter-dimensional trip to avenge the deaths of his wife and daughter. Wade Wilson is joined by previous comrades, Vanessa, Weasel, Colossus, Negasonic Teenage Warhead, and new additions Yukio and Domino, the latter of which we’ll soon be campaigning to receive a spin-off.

The film also boasts the first LGBTQ romance in a major superhero blockbuster, so yeah, it’s a big deal.

No, you’re not hearing ‘woof woof woof’ and ‘quack quack quack,’ but rather ‘woo woo woo’ and ‘cry cry cry’. That, however, already makes this song iconic. The classically-trained Cambridge kids have teamed up with Demi Lovato for their addictive masturbanger Solo which, as you’ve probably sussed by now, is all about self love. Here’s your song of the summer right here, folks.

When you’re not mistakenly thinking Demi is quacking on Clean Bandit’s new hit this weekend, you can also hear her on a huge new duet with Christina Aguilera. Fall in Line is a ferocious display of female empowerment, as the ladies’ epic vocals whip up a pop storm. The front row better hold onto their wigs when these two perform this live at the Billboard Music Awards.

The first season of 13 Reasons Why wrapped up all the storylines from Jay Asher’s novel of the same name, so we’re heading into unknown territory here. But with a new batch of episodes available to stream on Netflix now, there’s an extra layer to Hannah Baker’s story beyond what was recorded on those cassette tapes. For this run, a series of polaroid pictures give us an insight into the twists and turns yet to come.

For decades the music world has been full of LGBTQ heroes who have helped pave the way for acceptance and equality, bringing queer visibility to the mainstream and helping LGBTQ youth embrace their authentic self. Will Larnach Jones has rounded up 50 queer music icons for his new book, giving an overview of a range of groundbreaking artists from Elton John to Frank Ocean, and Beth Ditto to David Bowie. You can purchase your copy here.

French singer Héloïse Letissier has teamed up with Dâm-Funk for her funk-driven new single Girlfriend, which hears her address female desire by stripping away the male gaze. “I initially set out to smash against macho culture and macho men,” the Christine and the Queens singer explained. “I became obsessed with this idea of the macho man, and still being a woman.” The result is one of the most sensual songs you’ll hear this year.

Drag Race icon Bianca Del Rio is back for her second film and the forecast is fierce for Hurricane 2. This second instalment sees the queen tricked into going on a trip to Russia to accept a teaching award and cash prize, but what she finds instead is something else altogether. With starring roles from Katya and Shangela, as well as appearances from Darienne Lake and Mrs. Kasha Davis, it’s a must-watch for any Drag Race fanatic.