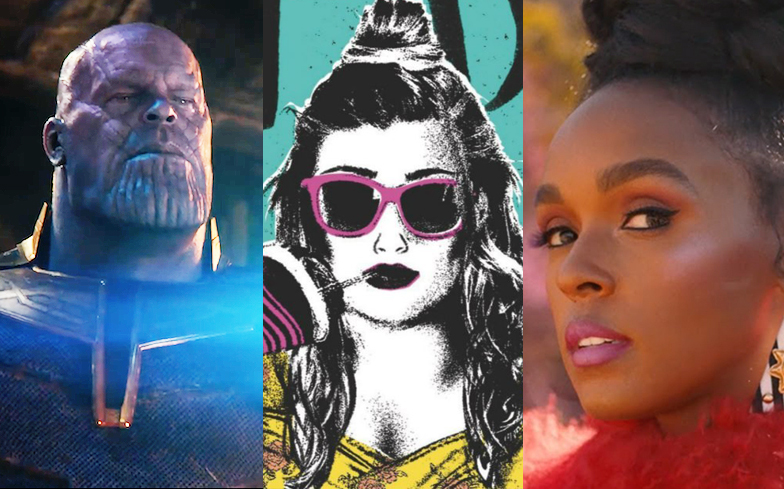 Blockbusters don’t get much bigger than Avengers: Infinity War and the superhero epic certainly delivers on that promise, while Janelle Moane is back with yet another effortlessly cool album, and we finally get to see what Love, Simon’s Simon Spier did next in Becky Albertalli’s new novel Leah On The Offbeat.

The movie event of the year has arrived, and it’s brought along with it Marvel’s most menacing villain to date. Thanos is on a quest to snag all six Infinity Stones to wield enough power to wipe out half of all living being in order to restore balance to the universe.

With a cast of Marvel’s mightiest heroes – including Iron Man, Spider-Man, Thor, Hulk, Captain America, the Guardians of the Galaxy and Doctor Strange – up against him, it results in one of the most epic superhero films to have ever graced the big screen. And trust us when we say that there are some very big twists in store.

From electro-funk grooves on Crazy, Classic, Life, to the Prince-inspired funk of lead single Make Me Feel, via Pynk’s celebration of queer female sexuality, Janelle Monae’s new album Dirty Computer is her most accomplished and outspoken collection to date. Best lyric? Of course it’s the one that serves as a warning to the US president. “If you try to grab my pussy, this pussy grab you back.” Incredible.

Leah On The Offbeat (book release) Following the huge success of Simon vs The Homo Sapiens Agenda and it’s big-screen adaptation Love, Simon, we head back to Creekwood High in this kind-of-a-sequel from Becky Albertalli. This time it’s from the perspective of Simon Spier’s BFF Leah, who’s coming to terms with telling her friends that she’s bisexual. Although she will be the focus of the new novel, Simon and Blue also have a prominent role as we find out how their relationship is going. It’s out now in the US, but UK readers will have to wait until 3 May to find out what happens next.

When it comes to jukebox musicals, you don’t get more theatrical than the back catalogue of Meatloaf. Bat Out Of Hell is set in a post-apocalyptic Manhattan, where the forever young leader of The Lost, Strat, falls in love with Raven. Trouble is, she’s the daughter of the ruler of the city who is aggressively against The Lost. If that storyline sounds slightly familiar, that’s because it’s loosely based on the tale of Peter Pan and Wendy. But when you mix classic fairytale, futuristic steam-punk and Meatloaf’s biggest hits, you get an electrifying show like nothing you’ve ever experienced before.

She may have only released her debut album Ephorize back in January, but American rapper CupcakKe is already offering up some new music. Quiz thrives on the star’s energetic flow and explicit lyrics, as bouncy electronics and hard beats make it a welcome addition to her ever-growing catalogue. As always, she’s not offering a slice but serving up a whole damn cakKe.