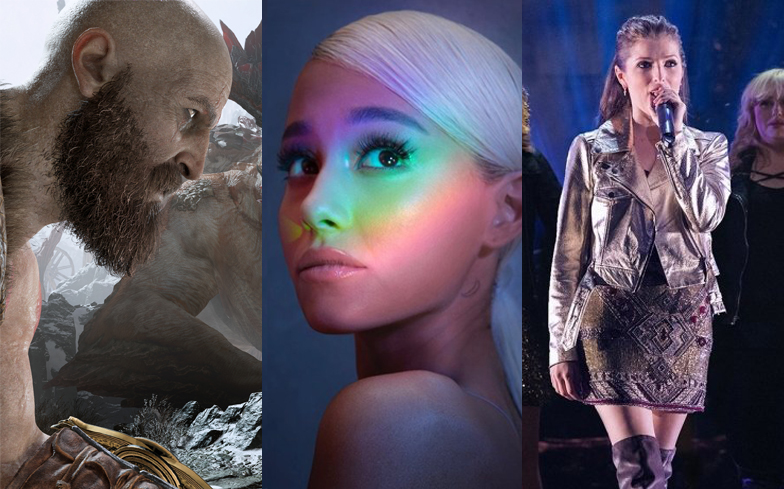 Ariana Grande’s new single strikes the perfect tone for her musical comeback since the Manchester Arena bombing last year, God of War has laid down the gauntlet to be one of the biggest blockbuster games of 2018, and you can finally take Pitch Perfect 3 home to sing along to at your heart’s content.

After teasing fans all week following her return to social media, Ariana Grande has unveiled her hotly-anticipated new single No Tears Left To Cry. What appears at first to be an emotive ballad, quickly turns to a more buoyant R&B/pop production, but it’s the lyrics here that strike deep. In a nod to the victims of the Manchester Arena bombing that happened at the end of her concert last year, Ariana sings of picking herself up after a dark time and strutting towards a future of hope. It strikes the perfect tone for her comeback.

Get ready to go on a journey like no other, as the classic mythology-based video game series is back in this highly-anticipated sequel. God of War sees Kratos embark on his most personal quest yet with his son Atreus, fighting their way through unfamiliar lands with an all-new battle system to turn monsters to dust. Making full use of the power packed into a PS4 to showcase a beautifully-created world – and trust us, it’s stunning – it’s already set itself apart as one of the biggest blockbuster gaming releases of the year. You can buy it right now here. It’s also available to download on the PlayStation Store.

With a look as smooth as his voice, Zak Abel can do that very rare thing: strut down the street wiggling his shoulders without managing to look like a fool. The effortlessly stylish singer-songwriter hits the city in his latest visual for new single Love Song, which is a bouncy pop anthem calling out a self-centred ex. By the end you’ll be attempting all the moves with – if we’re anything to go by – varying degrees of success.

From the author who gave us Nick and Norah’s Infinite Playlist and Naomi and Ely’s No Kiss List comes a love story with a unique twist. David Leviathan’s novel Every Day has got the big screen treatment in this teen romcom, which follows shy teenager Rhiannon who falls in love with a soul who transforms into a different person every day. It’s a timely reminder that the true value of a person is what’s on the inside, irregardless of sexual orientation, race, or gender identity.

Following its huge debut last year, Westworld is back for another series of action-packed episodes. Viewers will be taken back to the Wild West-themed amusement park for more sci-fi thrills. And with Dolores Abernathy staging a full-on revolution in the series finale back in 2017, what does that mean for the characters in this new era now the park creator is dead? And will we finally get a glimpse at what the real world looks like outside of Westworld? These are questions that probably won’t get answered for a few episodes yet. Westworld returns on HBO on 22 April.

The Pitches are back! But this time it’s for the farewell tour. The old gang reunite for their biggest challenge yet, going head-to-head with global talents. But with performances of Britney Spears’s Toxic, DNCE’s Cake By The Ocean, and George Michael’s classic Freedom! ’90, who’s really a match for The Bellas, eh? You’ll be able to take Picth Perfect 3 home on DVD or Blu-ray on 23 April.