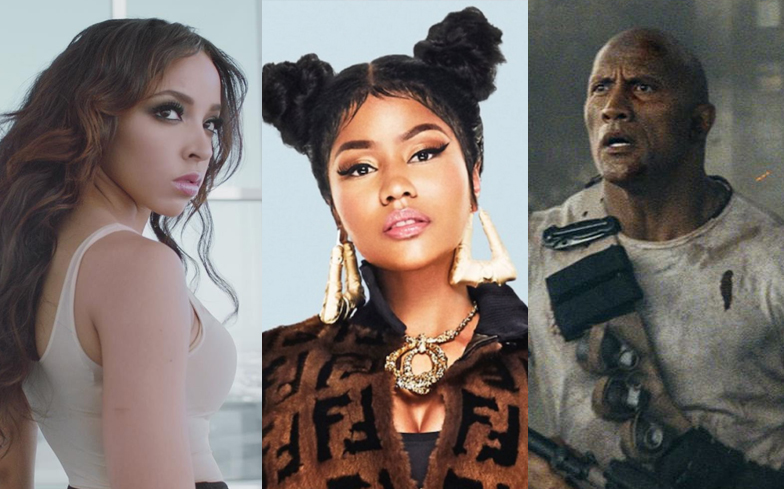 Can all passengers please make sure they are wearing their seat belts because this weekend you’re going on a Joyride with Tinashe, getting Lost in Space with Netflix, and firing up that chart with Nicki Minaj and her comeback singles.

“Bitch ain’t comin’ off the bench / While I’m comin’ off the court fully drenched / Here, get some haterade, get ya thirst quenched.” Yep, she’s back, and she certainly means business. Nicki Minaj is firing up that streaming chart with not one, but two new tracks. Both thrive on their minimalist production, packed with tough beats and underlying Nicki’s undeniably epic flow. There’s a reason she’s known as the Queen of Rap, and this is precisely it.

Tinashe fans breathe: the star’s long-awaited new album has finally arrived. After being delayed a number of times, the US singer’s latest collection Joyride has finally pulled up ready to take up on a journey through infectious pop bops, and a splattering of smooth R&B. Highlights include Stuck With Me and Ooh La La, but title track Joyride was well worth the money Tinashe’s team had to spend to buy it back from Rihanna.

Back in 1967 when Irwin Allen’s original series of Lost in Space aired, the idea of a family of space colonists seemed like a distant ambition. Now for this Netflix reboot, the Robinsons travelling into the stars for a new life echoes a very real concept recently laid out by Elon Musk. Also in 2018, the special effects required for a decent sci-fi series are easily achieved – especially when you have a Netflix budget. Although it plays on classic tropes – from marital issues, to stroppy teens – Lost in Space is a family sci-fi series ready to blast you into the cosmos.

Fresh from his blockbuster hit Jumanji: Welcome to the Jungle, Dwayne ‘The Rock’ Johnson is back with another action-packed extravaganza. This time he’s playing primatologist Davis Okoye, who has an unbreakable bond with an albino silverback gorilla. However, when the primate – named George – falls victim to a genetic experiment gone wrong, he mutates into a raging creature of gargantuan size. As the title suggests, all havoc breaks out and it’s down to Dwayne to save the day once again.

It’s been three years since Florence + The Machine’s last album How Big, How Blue, How Beautiful, so it was high time for the follow-up. Sky Full Of Song hints at a more stripped-down approach for the new music, but with a voice like Florence Welch’s, drama is still very much at the heart of the track.

From the big screen to centre stage in London’s glittering West End, Academy Award-winner Cuba Gooding Jr in hit musical Chicago. Serving up the razzle dazzle as Billy Flynn, the show features hits including Roxie, Cell Block Tango and the classic All That Jazz. Sadly, Catherine Zeta-Jones doesn’t feature. Tickets for the show are on sale now.

We’ve been big fans of Sigrid for well over a year now, ever since her fantastic debut single Don’t Kill My Vibe. Being named BBC Sound of 2018 and her booming anthem Strangers earlier this year saw her achieve mainstream recognition. Here on High Five, however, she takes things down a notch. There’s still an earworm melody on the chorus that is ready to pop off at her live shows, indicating that her highly anticipated debut album is going to be an eclectic affair.

Say hello to upcoming singer-songwriter Belgrave. The British musician – who used to a be a tailor on London’s Savile Row – has served up new track Riviera, an ethereal backdrop of tinned beats and dreamlike production led by his unique vocal tone. Citing childhood heroes such as Freddie Mercury, George Michael, and Elton John, it’s clear Belgrave puts songwriting at the very core of his output, and Riviera is a strong indication that his four-track EP – out on 25 May – is one to keep an eye on.